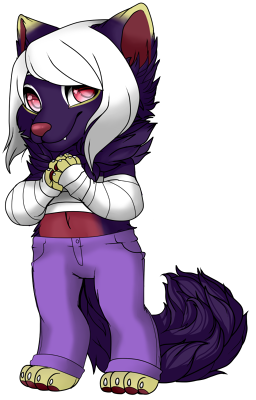 
As a child, Erelle was met with a destiny that she would someday save her village from a monster capable of destroying the village. She trained hard to be a strong fighter so she can defeat this beast when it comes. She ended up becoming a beacon of hope as that hero who would someday save the village. Unfortunately, her destiny was misplaced after her own defeat against this monster and someone else came to save the village. Ashamed at herself, she ran away. She could never show herself in her village again after her loss.
Now she lives in Quetzal Palace. She still trains just as hard in combat for hopes that someday her skills won't be misplaced.

She's reserved at first, but when she's comfortable around people, she becomes very active and lively. Her failed destiny still haunts her, so she occasionally becomes self-depreciative whenever she's reminded of it. She occasionally tells herself that her destiny might be for another time in the future.