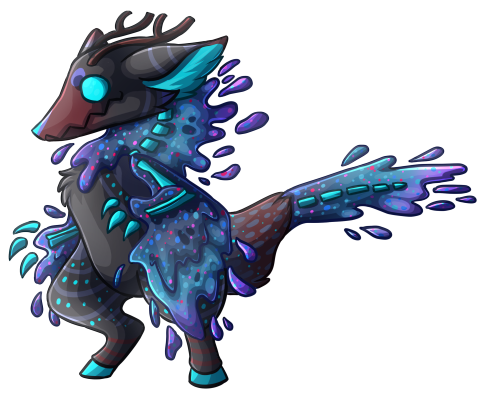 Currently being repaired by Nyssa.

Demon of knowledge, power, and the night
Whats one little deal?

Makes deals with the ambitious, gifting them forbidden knowledge to help pave their way to power. Doesn't interact with other demons much despite being one of the more powerful ones. Only the top dogs know her name and even fewer know what she looks like... She has her own motives and the less that know the better.

Fairly young for a demon, was abandoned and left on her own much like most reptiles are. She survived by eating her litter mates. Because of her young age she is inexperienced allowing her to lose to lesser but more experienced demons and foes in combat.

Enjoys having fun. Doesn't always make terrible deals for her summoners (if she actually answers the summons). Very excitable and energetic at most times but can easily swift moods to cold and calculate, silent predator, or foaming at the mouth rage.

Doesn't always make sense but there tends to be method to her madness.... most of the time.

The goo of her neck/tail/wings/etc is in fact edible but is highly addictive while giving the consumer temporary increased speed, strength, and stamina. Ingestion will cause glowing blue eyes.

A strange looking demon, their body seems to be a mix and match of fox, bat, and deer parts mixed with a semi-glowing space goo that show their bones in her neck, arms, and part of the tail.

Has many sharp teeth. Spit has blue tint that (depending on her mood) sometimes has sparkles in it. Sometimes the spit/drool faintly glows.

Seems to be around 7'3 height wise View all her art HERE!