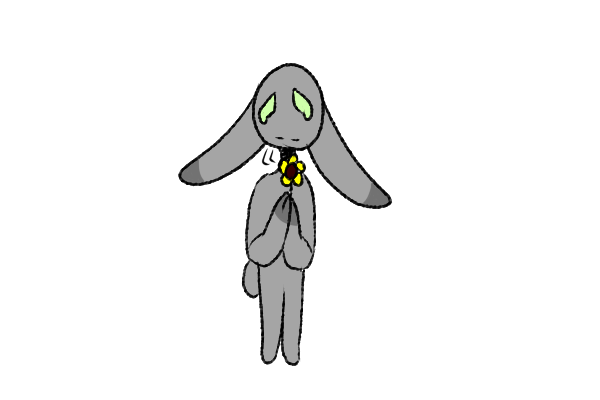 Hey, creator here. I've decided to make this profile a bit more special than the others.

Anxiety is supposed to protray every single negative part of me. My depression, ADHD, body dysphoria, etc. I wouldn't call them my "negative" fursona, or my "ventsona". They are part of me. Their name comes from their anxious habits, and their behavior among others. Anxiety will usually only respond to gender neutral pronouns (they, it), will sometimes respond to masculine, but will start crying if referred to as female. They despise being referred to as feminine in any way, shape or form, because--just like me--that isn't them.

Now, onto Anxiety's appearance. They take the form of a 5'4" rabbit, with grey fur, and some dark grey areas as well. They adorn glowing, light green eyes which seem to be constantly "dripping". Anxiety never really smiles--and only does so with Happiness, who is the complete opposite of Anxiety. They sometimes wear stickers, and love collecting them. Anxiety can take other forms, but anything else is exhausting, as if they weren't tired enough already.

Anxiety, truthfully, doesn't really show their emotion in public, or around others in general. Unfortunately, just like me, they bottle it up until it spills over and they can't stop it. It's a habit, and they can never seem to stop it, no matter how hard Anxiety tries. They heavily consider themselves a crybaby, and have been known to be over-emotional to things such as being insulted, being yelled at, or things they fear.

Anxiety hates their body immensely. They often wear hoodies to cover up their own body, usually caught staring at themselves in disgust. Anxiety was born female, but transitioned into a male as soon as possible. It was costly, but Anxiety had no cares about that. They're glad they made that choice, but they still feel the dysphoria they wish they never had to feel. Anxiety constantly lives in a state of fear, wondering who will reject them if they ever knew their secret. Anxiety hates the fact that people will reject anyone as soon as possible, if they dislike them, and fears it, all at the same time.

Long story short--this is getting kind of long--Anxiety is supposed to be the most negative parts of me, while my other sona, Happiness, is the opposite--my positive traits. Anxiety loves Happiness with all their heart, and just wants to be loved by them, but they believe they aren't worthy.