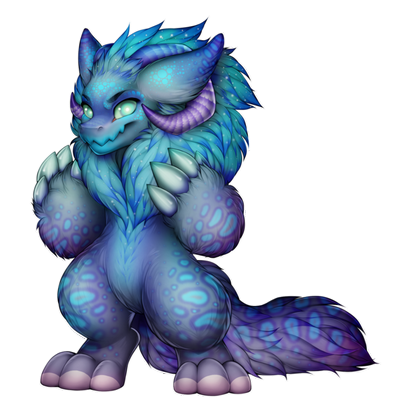 Bubblegum hasn't had a happy life. Born as the beloved son to two beloved alchemists, Bubblegum had a bright future ahead of him. However, when he was a toddler, he managed to sneak into his parents' lab when they weren't looking, ingesting one of the cooler-looking potions. At such a young age, the transformation was painful, and he was wracked with excruciating body spasms. Finally, when it was all over, the confused and scared Bubblegum escaped to the streets.

Years passed, and Bubblegum lived on his own, treated as an outcast for his fearsome looks. This is where he acquired the name Bubblegum-in an attempt to make himself look less fearsome, he gave himself a 'cute' name. This hardly helped, however, as Bubblegum never even got to finish introducing himself before being chased off, or even attacked and beaten.

But one night, when he was lying alone and crying in a dark alleyway, he met Stargleam Shimmer. Taking pity on him, Stargleam offered him a home, as long as he earned his keep as an explorer. Bubblegum hastily and thankfully agreed, and Stargleam took him to her village. Though Bubblegum was not one of the higher class villagers like Silver, Butch, and Kingpin, and was instead part of the lower working class among Hearth, Shelly, and a few others, he was happy nonetheless. Even though people still gave him scared of threatening looks, under Stargleam's protection, they could do him no harm.

He has become good friends with Stargleam, and enjoys talking to Hearth because she is the most understanding and kind, and doesn't judge him by his looks. And with Stargleam's help, he is even becoming more acquainted with the upper class as well.

Bubblegum has and always will love carnivals and fairs-he even won his loyal catbat Frankie at a carnival.