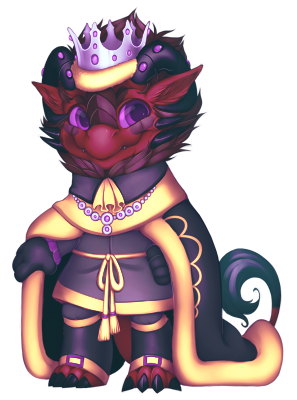 All comments made by Akihiko are in-character!

He used to be the ruler of the Firehawk kingdom, but a war against the Frostwings caused him to be murdered in cold blood. During the war, his wife, Queen Astra, sent their son Tichiir off in order to protect him. Right before this happened, Akihiko was shot in the head, killed instantly.

Before he became king, he was exiled due to a curse laid upon him. He became half-serpent; the Firehawks feared serpentine beings. During his exile, he met many friends and enemies, and lost quite a few along the way as well. During that time, he met Astra, who was formerly known as Mid Knight. They became close and decided to live together before they finally moved back to his true home.

Sir Nightfang met Akihiko late into his exile, and they also grew close, the wickerbeast protecting the former king with his life. Nightfang was also sent off during the war by Akihiko so he would not die, but he ended up finding Tichiir and settling with him, acting as a bodyguard for the young prince.

Akihiko is now dead, and his core is guarded by the vicious wickerbeast.