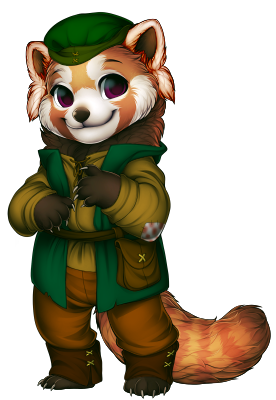 Rohan is infected with Lycanthropy. Changes into a beastly monster after exposure to moonlight or especially frustrating board games. Howling at the moon relieves the symptoms for a little while, but use a Golden Apple for best results.

Rohan is a playful little bundle of fur who is also a great escape artist. They are based off of an actual Red Panda I was able to watch with his sibling, Pumori.

As a fighter, Rohan is all out energetic, and will run into any situation head first! This, however, does not mean he's a great fighter. Quite the opposite, in fact. He often gets himself knocked out, not thinking and not being prepared enough. But nothing seems to break his spirit, and he will only ready himself for the next battle!

He tries, and that's what truly matters.