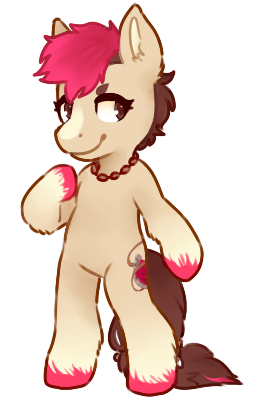 Full Name: Mustang Sally.
Nickname; Goes by Sally or Mustang for short.
Gender: Female.
Sexuality: Heterosexual.
Cutie mark talent: Roping/catching cows, could be possible that she's a professional at it. She's also an expressive artist who loves to draw and play acoustic guitar. (And possibly electric guitar?)
Pet; She has a female pet Chinchilla named Tumbleweed.
Tumbleweed is a word term for a plant of dry regions (such as Russian thistle or any of several amaranths) that breaks away from its roots in in late summer and the autumn and is driven/tumbled about by the wind, as a light rolliing mass, thereby disperses its seeds.
(On here, her pet is technically a Suchilla but that's the closest thing to an Chinchilla that Furvilla has.)
Personality: Work in progress. I don't know what her personality is going to be honestly, but her looks are very rebellious for a pony who's talent is roping. I think she isn't going to be the average cowgirl for her personality (including likes and dislikes) despite her talent for roping.
Likes: Work in progress.
Dislikes: Work in progress.

OC and villager bought from Witcher
Paintie by reshiram