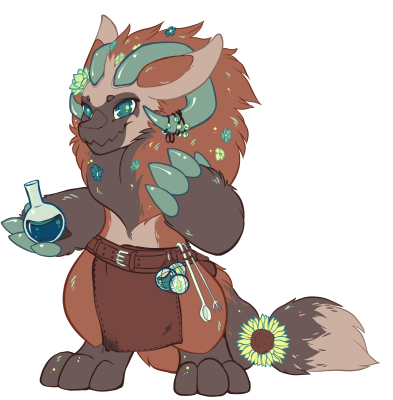 like this css? you can purchase it here! works for both villager and user profiles.

he goes by sleepless, a nickname acquired over the years. the townsfolk could see the faint glow from his house as he worked tirelessly throughout the nights. on what, they did not know, but many appreciated his dedication.

sleepless is primarily an alchemist, but dabbles in some other careers as well. he enjoys brewing many interesting potions. despite being a wickerbeast, his favorite potion is most likely the dutch angel dragon. in the future, sleepless hopes to master all the potions of the lands.

he grew up on the outskirts of dragon's maw manor before moving to quetzal palace to establish a career in alchemy. as he was from a different town, he often felt a bit of a disconnect to the fierce loyalty to quetzal palace the other citizens held. still, this was his home.

at some point in time sleepless would like to travel to the rest of the towns. however, this seems to be far off due to his busy job.

sleepless says the key to success is to advertise on the internet. you bet he still uses windows 95! people have told him this is silly, but he loves the interface. literally no one else agrees.