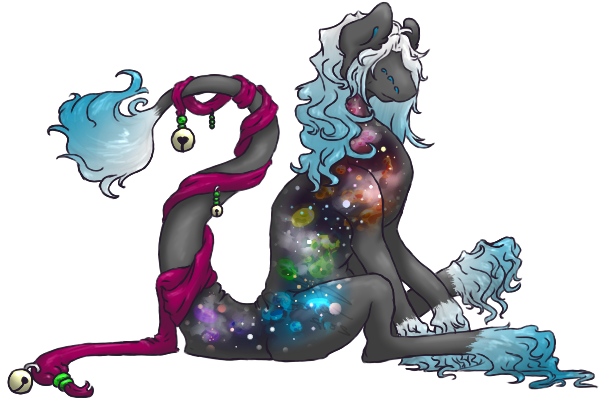 Creature is almost horse-like, but not quite. Has a long tail ending in a plume of soft hair. Mane and tail are of blue-silver in color. Long legs end in hoof-like 'claws covered by blue-silver hair. Long body, seeming to give the appearance of glass or a lava-lamp. A 'galaxy' of sorts is observed to be inside with 'lava-lamp lava' of multiple colors bobbing inside. It is unclear as to how it is able to have this or what materials it's made out of to give this appearance.

This creature has no visual orbits in which to see the world around it. However, despite this, the creature is able to 'see' with pin point accuracy due to it's heat pits along it's snout. These heat pits detect odors, heat, and [DATA EXPUNGED]. It seems that the long ribbon with bells and stones wrapped around it's tail, which is made of [DATA REDACTED], helps to aid in a form of echolocation.

The creature itself is very gentle, more interested in collecting smooth stones or trinkets rather then to harm another entity when it bumps past or stumbles into it's territory. This creature, who has fancied the name Rift, is cheerful in conversation.


Notes:
Closed species made by:King_Mettaton/Chiaki1313 (my DA)
Decided to introduce these little guys here after I did nothing with them for a while over on DA. They're called Heinbel. More info [even tho it's old as well as more examples] can be found HERE
Pantie made by:King_Mettaton
Get your very own Heinbel HERE