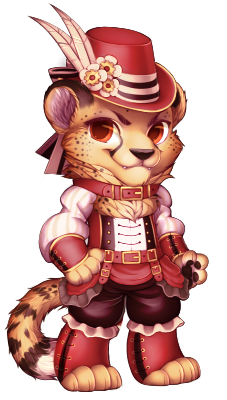 All comments made by Cyto are in-character!

Cyto was saved by his friend's from a video game, which wiped their memories, and made them clueless of the real world. Once Cyto released his friend's temporarily from the creator's clutches, they'd all escaped, and now live peacefully in the real world. Cyto promised to himself, that he'd never touch a virtual reality game, ever again.

Upon reaching a lonesome village in Dragon's Maw Manor, Cyto seemed afraid of its strange inhabitants within. A masked, nine-tailed fox greeted him at the entrance, gently claiming that there was an open space in their village for him to stay and rest his paws.

The glares of the botanist make Cyto's fur stand on end. He doesn't trust that tail-mouthed wolf. ...What even is that grinning creature?
He doesn't really want to stay, but the nine-tailed fox takes care of him, at least.