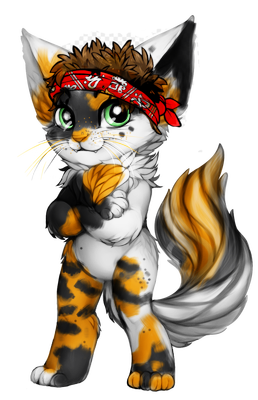 Quinn is infected with Lycanthropy. Changes into a beastly monster after exposure to moonlight or especially frustrating board games. Howling at the moon relieves the symptoms for a little while, but use a Golden Apple for best results.

"Hey, hey you there. You haven't seen any sky coins recently, have you"
You take a few seconds to process that you're being addressed, by a scruffy looking teenage cat. She's on her hands and knees, poking around in the dirt with a stick. She has a dirty red bandana tied in her fur, and is wearing some kind of toothy necklace.
"I caught one a little while ago and it's flown off...I'm Quinn, pleased to meetya" she holds out a dusty paw.
You shake it, apologise, and tell her you haven't seen any sky coins, before realising you might have come across one at some point....
Too late, she seems to have wandered off into the bushes.


Quinn was raised by the Spirit Lions of the Clawtooth tribe, and has always wanted to be a protector of the tribe. However, Quinn so far hasn't been able to bind herself to any of the Clawtoothian spirits.
Quinn is very curious and loves adventure, she's been very independent since xe was very small and frequently wanders off. Recently, on coming back to the Tribe's camp, xe found xyr "family" dispersed and half the tribe missing. Ever since its been her quest to discover what's been happening.
After accidentally getting herself into a fight with Avarice, Quinn now lives in the town of Halcyon, until she can rejoin her tribe and Avarice acts as a mentor of sorts, and has been teaching Quinn how to fight. Quinn enjoys exploring, and jumping out at the other villagers, taking them by surprise. This is the most fun when it's Luka or Asteria that's at the other end of this surprise.
pinterest board