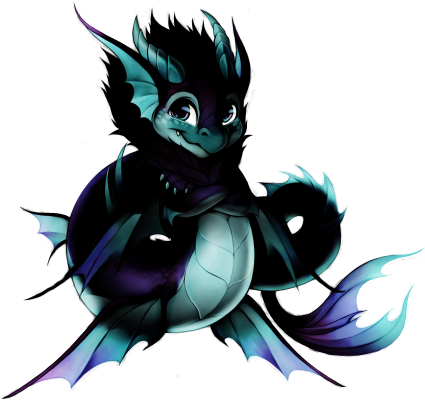 "The ocean is a mighty harmonist." William Wordsworth
Rigel is a dragon. He's a bit mouthy dragon and shows off a ton. He's nineteen years of age but acts much younger. He's the friend that eats like a trash can and never puts on a pound. He often gets himself, along with one more of his friends, in trouble. Maybe it's because Pollux doesn't really say much, though he doesn't really pay much attention either, but Rigel has taken a huge interest in him even if it's just to hang around with a DutchAD or because they are both some sort of Dragon... he thinks.

Aquatic Dragons prefer to live in the deep ocean and have specialized scales that protect them from the pressures of the great depths. Their bodies are often capable of controllable bioluminescence, Rigel happens to have a metallic effect to his horns, fins, and underbelly. Typically schools of lantern-fish follow aquatic dragons around. These dragons are collectors of anything from the surface. Their treasure troves are usually filled with items recovered from shipwrecks.

Rigel has a specific interest in plants and his trove is mostly filled with objects he can put them in, skulls included. He's not necessarily ashamed of this but he doesn't like to make it public. Castor happened to catch him indulging in this and struck a deal to get first pick of his plant selection.