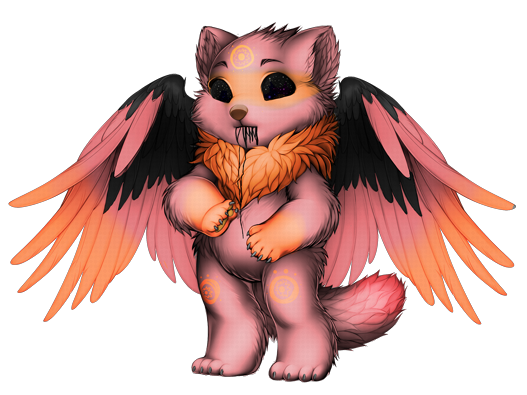 Anthus is infected with Zombipathy. Eating brains relieves symptoms for a time, but comes with memories of the brain's former life. Your doctor recommends adding hot sauce for extra flavor, but a Golden Apple a day will send the Zombipathy away.

An earthly deity and Ark's companion, Anthus prefers solitude and silence rather than the company of mortals.
They are a lot more aggressive and disagreeable than Ark, and enjoys using wishes to cause further dismay and mayhem.
Athus eternally drools oil, and it's widely believed he bleeds it too. If one is lucky, he's willing to stand still long enough to make anyone rich.
They enjoy offerings made in their name, their favorites being kritties and wuffs.

-Abilities-
Ark and Anthus possess the ability to merge their bodies to create Arkanthus.
Both gods can also change their forms, but only into their mortal species. (Ark being a large bat, Anthus a very grumpy raccoon.) Their lost limbs and wings (in Anthus' case) are replaced with large circular markings. Anthus' oily drool is replaced with a large dark stripe running down their chin and neck.