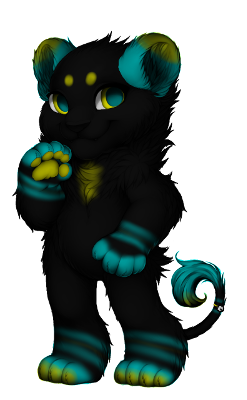 Rosabel watched as the gray tabby cast glances all around the room, and the wolf began to grow a tiny bit suspicious, as well as fearful. He considered slinking away without another word, but the tabby had seemed really happy when Rosabel had asked what they were holding, and the wolf didn't want to make any bad impressions. He just hoped whatever it was didn't get him killed. He stiffened when they were surrounded by whining and mewling pups, and tried to force his fur to lay flat. They weren't dangerous or lethal just yet, and besides, scaring a young specter was what had gotten him in this situation in the first place. It also got his cheek smacked. He rubbed the wound which was beginning to scab, and hoped it wouldn't get infected. It suddenly occurred to Rosabel that he was placing a lot of his wellbeing on hope and the mercy of his captors, which didn't sit well with the rosy wolf.

Rosabel's eye widened slightly as a small, emerald beetle was revealed. Sure, it was just a bug, but it had to be the brightest and shiniest thing in the whole room. And given the circumstances, that was saying something. The noses of the pups pressed up against the sparkling green shell, and Rosabel faintly remembered that false-wyverns liked bugs. He had gone to Fern to get some bandages for his eye, but the fennec fox was busy, saying that she needed to go out to collect insects for her false-wyvern pups, especially the gem-covered ones because that was their favorite. Did false-wyvern like to eat gems? Rosabel faintly wrinkled his nose, he couldn't imagine gems being very tasty. His ears flattened and his fur puffed up (as much as it could, as the blood was still sticking to it) when he heard the beetle hiss, and he slowly turned to watch the adult false-wyvern saunter over to them. Rosabel slowly scooted back inch by inch, his eyes never leaving the adult worker. Nope, nope nope nope. This wasn't his problem, he hadn't done anything wrong, just nope.

The wolf silently watched the conversation, his heart pounding in his flattened ears. If encounters with the workers were always going to stress him out this much, he was sure he was going to die of a panic attack or high blood pressure levels before they could kill him by tearing him apart or something. He saw the adult's eyes narrow, and Rosabel's airway grew tight. False-wyverns obviously had a good sense of smell, meaning the tabby definitively wasn't to hide the beetle, so what was wrong with what they had? He couldn't look away when the adult placed its claws on to the tabby's paws, and the wolf was sure that the tabby was going to get punished, or killed. Then they said something about a different creature, and the worker seemed satisfied and just walked away. "Huh, I guess some do have names," Rosabel murmured to himself, his voice almost a wheeze. Rosabel took a few moments to steady their breathing, and then leaned back in to whisper to the tabby. "What's wrong with gems?" he asked. "And who's Snowpuff?"

Rain meticulously organized the papers on her desk, taking her time and making sure each paper was where it needed to be. It wasn't just because of the specific way that the papers needed to be organized that was slowing her down, or the fact that she hadn't slept for some time now, but also because something else was weighing on her mind. It had been far too long since Starscape Child, Honest, and that good-for-nothing scoundrel Rosabel went off to find Loveless, Rosabel's ex, in false-wyvern territory. Had she sent them off with enough offerings? What if Loveless was already dead or captured? What if Rosabel managed to screw something up and they all ended up dying? She knew the wolf hadn't been listening when she had instructed them on how to safely navigate the territory, which was obviously a huge problem. Rain let out a groan, folding her arms on her desk and burying her snout in them. Why hadn't she gone with them to make sure everything went smoothly? Oh right, because apparently a large group of psychos had escaped from an asylum in Dragonsmaw Manor and posed a huge threat to both the citizens of Silverflecked Village and the much larger town, and as much as Rain liked to grant forgiveness to past felons, the escapees were far beyond saving and the Dragonsmaw Manor police force had even hired her assistance is catching them since they ventured into her woods, and Rain knew that it had to be a big problem for them to ask for her help and oh boy was she right. The dragon had worked as quickly and efficiently as possible, skipping meals and rest hours so she could have more time to catch all of them so she could make it back to her village in time to make sure Starscape Child, Honest, and Loveless got back safe. And now they still weren't home. Rain was considering gathering up a large amount of offerings and going out to look for him despite her state of fatigue, when the door opened.

Rain felt relief wash over her whe she was met with the familiar faces of Honest and Loveless, and especially her good friend Starscape Child. She let out a sigh, a wobbly grin taking over her snout. Resting her head in the palm of one her paws, she spoke to them with a tired yet happy inflection in her voice. "You guys really had me scared, you know," she chuckled, standing up and beginning to organize her file cabinets as she talked. Best to still get things done even when welcoming back her villagers. "So, how'd it go? You guys look unscathed, so it had to have gone well. Where's Rosabel? Didn't want to meet back here? Go figure, sending him to retrieve the boyfriend he drove away probably took a decent chunk out of his pride." Rain waiter and listened for an answer, but when none came, turned around with a confused expression on her snout. No one was meeting her gaze