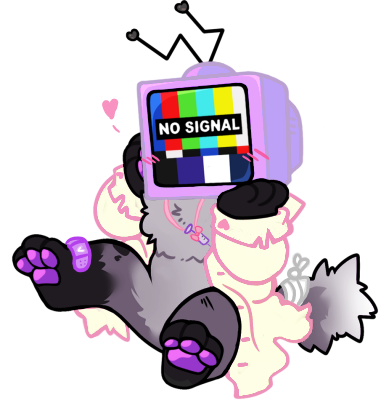 You enter what at first, seems like a hospital room, but after entering its doors seems to be more of a pink-infested bedroom? There are plush animals in casts and strange pastel clothes littering the floor. In the distance, you can hear a movie playing. You investigate. There is a chair of sorts and you can see the back of an old-fashioned purple TV. Odd. What is a TV doing in a chair?

You step closer and, to your surprise, the movie stops! And the TV - oh my god- it stands up!! Adorning this, this body's shoulders is a pale pink lab coat, and a tail swishing under it shows that the body may belong to a hyena. It turns around; color bars now filling the screen's display.

Noticing you, this creature jumps back a bit. You've startled him. The screen flickers through several images: first a question mark, then a small animation of a pixel hourglass turning over and over, then that of a grinning, fang-filled smile.

"Hello!" chimes a robotic voice of sorts, "My name is Infatuam!"


This sweet boy isn't entirely sure how he ended up this way and often notices new "ouchies" on his body. The only thing he does know is that the hospital is where he woke up one day and that the TV isn't electric at all, but rather works just like a regular brain does. He's found notes before with drawings of what could have been his normal body, along with several other drawings of other poor folks with TVs for heads and the words "experiment failed" written in red ink on most of them. Despite this, he's actually a very cheerful little guy, and loves showing people his fancy face! Although there are times when he's by himself in his room that he feels really lonely...

One of Infatuam's favorite things to listen to is silly talk shows about relationships. Sure he could always watch them instead but something feels weird about having to hold a mirror up for so long. Don't ask how he sees, he's not entirely sure either. Just kinda does, y'know?

Yes, he found that syringe on the floor and decorated it, no he doesn't have any idea if it's sterile or not, and no he will NOT take it off he worked so hard on his favorite necklace!!