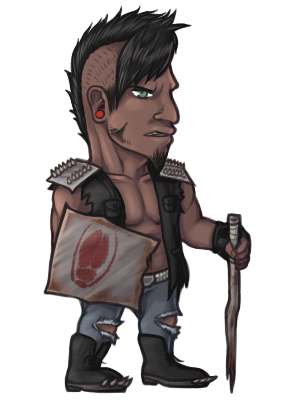 Demetrius Lazar, along with the Arkesiel Kartikeya, was cast out of civilization because, in his time, friendship between Arkesiel and humans was strictly illegal.

Demetrius and Kartikeya were taken in by a troupe of Roachfolk living in the wastelands that Arkesiel and humans refused to inhabit due to inhospitable conditions.

This band of Roachfolk was led by Kevin Lerezar, who had aspirations of someday rebelling against the tiered oppression faced by the humans and Roachfolk at the hands of Exelsiel's empire.

Eventually, Kevin and Demetrius developed a romantic relationship, as Demetrius' time with the Roachfolk made him realize they were nothing like the myths he was brought up upon. All the myths of Roachfolk being maneaters, parasites, and what have you, were total hogwash. Roachfolk are no different from humans.

Demetrius married Kevin, who took his surname, becoming the iconic Kevin Lazar of legend. They had one child, a daughter named Katherine, who was the world's first demiroach.

Katherine's very existence was a huge problem for the propaganda-fueled regime upheld by the Excelsiel Empire. They sent an army to kill her, because she could not be seen by civilized humans. Demetrius died protecting his daughter.

During his time with the Roach Rebellion, Demetrius benefited them invaluably with his mechanical handiness and education that the Roachfolk, who have been surviving in a wasteland their whole lives, lacked. He learned from Arkesiel how to build automobiles, providing the Rebellion with a vehicle that they dubbed the Roach Rod.

Before he died, though, Demetrius passed on everything he knew to his wife, daughter, and the rest of the Roach Rebellion.