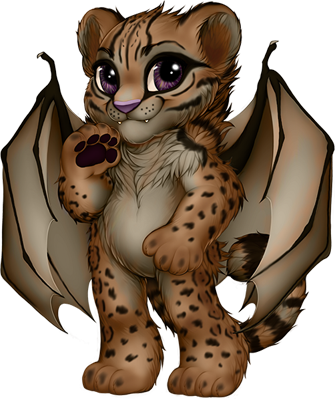 A product of experimentation, she is highly Empathic and Telepathic. She is capable of manipulating shadows, compelling them to hide her as she needs. And though she is most often just a small, rather ordinary looking ocelot with strangely purple eyes, she isn't always. She can also swell in size until the top of her head is nearly eight feet high, and while she still looks like and ocelot, she has huge bat-like wings in that form. And she can take a bipedal form, one slightly over five feet tall, with the same bat-like wings. In all her forms she can be identified by her large, purple eyes. ((What Ocelotta doesn't quite understand yet . . . she has nine lives. And each time she dies, she gains a new form, a form capable of surviving her previous death.))

M.E.B.E.L.P. 24 or Magically Enhanced Biogenetically Engineered Leopardus Pardalis 24 was a small, cute fluff-ball with huge eyes in an antiseptic cage when Gracie Fuentes was hired to clean the labs. The woman hummed as she worked in he other rooms. Her mind was bright, happy. There was little that was bright or happy in the small cat's life. She was surrounded by other cages filled with pain and fear and anger. And then there were those outside the cages.

Mostly the scientists were okay. Their minds were interesting. Some were analytical, but they enjoyed the calculations, the equations that those in the cages represented. Some were curious, excited, interested in opening up the universe with the work they did here. Some were trying to fix a particular problem, driven by the task they had set themselves, some of these held such sadness. Some were just indifferent, here for the paycheck and not worried one way or the other. But a few, a few were here for the pain.

Graciela Fuentes was the first mind M.E.B.E.L.P 24 had touched that shined. Though that light dimmed when she entered the room with the cages. Fear touched it, terror, confusion. M.E.B.E.L.P 24 hfelt the light fade as the woman saw what science had wrought here. And the tiny ocelot was confused. No other had reacted to this room in this manner.

Before she could think on it, the woman was crooning, her mind turned to nurture and care. She approached the cages and was met with the growls and snarls of those who had been trapped and tortured beyond their understanding. M.E.B.E.L.P 24 mewed, a small sound in the dim nighttime lights of the lab. She wanted the woman's light back, the happiness.

After a while Graciela's path brought her to the cage of the small cat. M.E.B.E.L.P 24 moved to the edge of the cage, interspersing her mewling with purring loud enough to mimic an engine. The woman's smile was genuine, but sad.

She cooed and cared to scratch the kitten's head. Murmuring comforting words as she gave a name to one who had only a lab abbreviation before. Angelita.

For months the woman came at night, cleaning the room, the cages. And always she spent extra time with her 'little angel'. She even took the kitten out, cuddling her and letting her play with the mop ends as she cleaned the floor. From her Angelita learned what happiness, joy, and love felt like.

Graciela didn't know what the lab was for, what was done here. It was the morning after Angelita had been experimented on rather extensively that the woman understood the horror here. She saw the tiny cast on one leg, the bandages wrapping the whole torso of the cat. She could tell from the slow movement and the small hisses that her little friend was hurt. Though even hurt, Angelita never showed Graciela her claw or bit at the woman's hand.

With tears in her eyes, Graciela did her best to care for the kitten, but she left before the room was fully cleaned. Angelita never saw the woman again. She didn't know where the bright mind had gone, what had happened. And in her confusion she tried to ask.

The scientists were confused by mental images of happiness, friendship, love, joy. Of snatches of humming and visions of mop strings. It took them time to figure out they were mental projections from one of the subjects. Longer still to determine where the projections were coming from.

Once they did the emotions were varied. For many this was a breakthrough, a cause for celebration. For others, it was a problem, a subject who could project thoughts and seemed to be able to pick them up. The subject was still small, still young and seemed not to understand, but that might change. So they worked on a solution.

The collar was huge, clunky. The kitten could barely raise her head or walk under the weight of it. But it seemed to block her projections and, they hoped, her ability to read them.

Angelita hated the collar. It was heavy, it itched, more inside her head than on her neck. It scratched at her mind with noise and small electrical bursts of pain. But she could still catch bits of understanding through it, small, mostly enough to understand words as they were spoken, but she wasn't completely mind blind. And as she grew, the influence of the collar was less with her mind adapting to its influence. She even learned to 'speak' with the others in the cages around her.

Mostly they were animals, their bodies twisted into strange and powerful forms, but their minds simple. But some were more. Though those were twisted by this place, by the pain and the fear.

Angelita did not want to be like them. She thought of them as their thoughts seemed, 'dark ones'. She held onto the memory of Graciela and worked to keep her mind, her thoughts, bright. It helped that she could understand the scientists. She could see that most of them didn't inflict pain intentionally. But, rather, as a byproduct of what they saw as a greater good. So she did not struggle, she didn't fight them or lash out in anger. And she was usually picked last for the worst of the trials and was generally given pain killers with the sedatives and was treated more quickly when something seemed to be wrong.

Of course, there were those who enjoyed inflicting pain. And those she fought, scoring them with her claws and squirming to get free. She couldn't avoid them, couldn't avoid any of it. But she understood that, somehow, she was part of making things better, somewhere. And since she had never known anything else, that was enough. That and the memory of Graciela.

Then came the day when things changed. Angelita didn't understand what happened or why. She only knew that something was different.

There were more people, and they were not here willingly. The scientist . . . the ones who liked pain seemed to be in charge. Those animals in the other cages began disappearing, taken to a room with the frightened people.

What emerged were things twisted and dark, full of pain and anger. They were pressed into a space too small, and more people, more animals, were brought in, creating new and horrible torments.

Angelita's mind was assaulted by their pain, anger, fear. She was grateful, for the first time, to the collar. It had been a long time since it was too large for her, but she let herself drown in the 'noise' of it, clinging to the bright memory of happiness and love.

Then they came for her. Angelita knew she could not let herself become one of those things. She couldn't even contemplate being in the same space with them. In desperation she fought.

For the first time she truly fought. She did not want to be here. She would not let them do this. She puffed herself up in her little cage, hissing and spitting. Her claws flashed and those who had come for her moved back.

They had never used the tranq gun on her before, never had to. But they brought it out now. The sting as it hit had her biting it from her side. Then things began to get fuzzy, dim.

The cage was too small, too tight. Then it began to rend as stress was put on all its weak points at once. And she was standing there, over the debris. Her voice a roar as she screamed her challenge at those who threatened her.

The collar had fallen and her mind was filled with the torment of the creatures in the other room. She lashed out with their horror and pain. Around hr fell those who a moment ago had been trying to subdue her. Some with tears streaming from eyes, some screaming, some into unconsciousness. Angelita didn't care.

She would leave this place. It had been all she had known, but she knew there was light away from here. She would find Graciela, find love again. It took some time as she squeezed through doors, but none who tried to stop her could stand against the assault of thoughts from that room of horrors.

As she emerged into open air, she felt overwhelmed. It was so vast, so different. So much light, so many sounds, such a variety of scents.

Long dormant instincts sent the small ocelot towards the green, trees and grasses, that she didn't understand but she knew could hide her. The shadows she kept to seemed to wrap around her. And if she didn't know what she would do now, how could she possibly find Graciela, but she could feel other bright minds.

There was love and joy and so many other things here. She touched them briefly, feeling them, taking them into herself. She would be this. They tried to make her one of the dark things. But she would never be that. Angelita would choose what she was, no longer allowing others to decide that for her. And she decided she would be bright, light, happy.