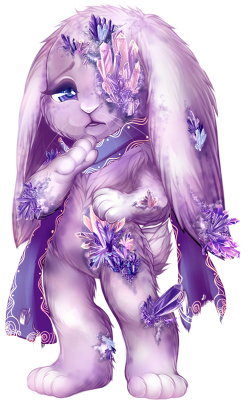 Keela is a very nervous and awkward bunny with very long and floppy ears. Their skin and blood reacts strangely with the air here and forms crystals when exposed. Around the sites of these crystal growths appear galactic patterns, almost like bruising. The crystals don't hurt Keela at all, but don't help their anxieties one bit. Sometimes the crystals will fall off and heal, so the locations of crystals shift every so often. However, some places almost never change, such as the patch covering their left eye and running down their face and a particularly large growth on their right hip. Full size version of paintie, done by the wonderful magicalderp !