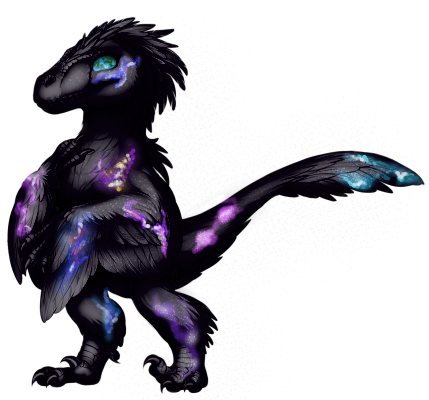 Vesuvius is a timeless spirit and an intergalactic guardian who keeps a watchful eye on the Earth and its inhabitants. Vesuvius' range extends far beyond the Earth, but seems to be temporary bound to Earth and is here to help with its evolution. He takes the form of a velociraptor as a symbol of Earth time, although he is far more ancient than that yet at the same time perpetually new. Vesuvius usually keeps silent from a watchful corner, but can be contacted through dreams and visions. He helps those who seek him, but can also serve as a warning sign for those who take advantage of and/or have angered the Earth and/or the galaxy or universe. Vesuvius is a member of The Intergalactic/Interdimensional Multiversal/Existential council also known as T.I.I.M.E. (C)

Little known fact is Vesuvius is also a rap producer and artist. His rapper name is actually Velociraptor, which is a big hit amongst humans. He used to do rap battles, but no one wants to battle anymore since he tends to eat his opponents. (After spitting some automatic, high velocity raps about existentialist multilateral stuff that no one understands anyway)