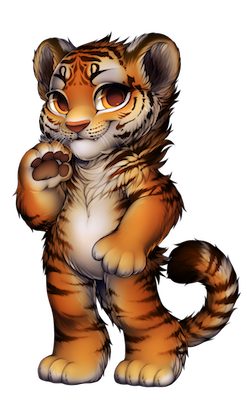 You cautiously sit down on the grass, silently observing as the kneeling tiger packs down the soil around a freshly-planted flower. Its delicate white petals quiver slightly with the tiger's gentle movements. You are hesitant to say anything to distract him. His back is to you, but you know that he heard you come into the garden.
"What do you want?" he asks, his voice deep and somewhat tired. You guess he does not get visitors often. His accent is very thick and hard to place, the 'w' being pronounced like a 'v'. He does not turn around to ask you this question, simply sitting still, facing away from you, hovering over the flower.
You ask what flower that is.
"Ah," he mutters, finally turning to look at you. His eyes are intense, and seem to be much older than his face. He brushes off the sleeves of his sweater. "It is a crocus. From my country. I like them."
He seems prepared to stop talking then. He is about to turn back to his garden.
Tell me about yourself.
"Ah. Okay. So that's what you want." He has a slight smile on his face.
"I was, eh, 13 when they came. Eventually, I was glad that I had an excuse to leave. Always wanted to leave. Did not have a good childhood. Very... very hard. Much sadness." He moves over to a new spot in the soil, turning back away from you. You see his eyes narrow before he looks away. "Of course, I did not know anything else. At that time, I was angry because I could not stay." He gives a wry chuckle and picks up a new flower from the large pot behind him. "I just knew it was not good. All the kids around me, dying, getting hurt all the time. Accidents and sickness. We were, eh, very poor. Very little things we owned. Few animals. We were bad off when they came and took the animals."
He packs the soil again, much harder than last time. The force behind his paws is too strong, and the flower shakes in the ground.
"My brothers and sister and I, we did not like this. My two older brothers, they told me, stay here because I was too young. They went to the capital and fought. They did not come back. My parents, very sad. My sister, she said, let's go. And so we did. I feel bad, very bad for leaving my parents that way. But we had to, or else we would not have made it."
He stops speaking and moves onto the next flower. You sit for a few minutes while he works. It seems he is done speaking for good this time. A butterfly floats over and lands on the tip of his tail, which stops twitching.
After a another minute he turns back. "Why you still here?"
Did you ever meet them?
"Ah. No, no, I never encountered them myself. But my brothers did. That is why they went. They saw how cruel they were. They saw how they did not like our people. Think they deserve more than us because they are the true Soviets, ya? So my brothers went to fight. They did not want them in our country."
So what happened when you left?
"Eh, we took our bikes. We took some forints we had saved, just a little money. And we left. We ran into some soldiers, but they were with us. Told us to keep going. We were nervous, at first. Not knowing if they would just shoot us there. Very scared. But we kept going. Eventually we made it, ya? Had to leave our bikes and get on a train in Austria. It was hard, but eventually I made it here. I am glad I left, though. Things were even worse back home. Many deaths, many bad things. Very bad off after the revolution. But I am here now. That's it." He turned back to his garden, tail twitching. The butterfly fluttered around his head.
And what about your sister?
He freezes. It takes him a while to respond. "Maybe, it is best if you leave now." His voice has a slight rasp to it. He gets up and enters the back door of the little red-roofed house without looking at you.
A small drop of water glistens on the crocus. János sits uncomfortably at one of the glittering tables. He keeps tugging at his cuffs and collar.
You ask him what's wrong.
"These parties. They are not really something I do."
You keep looking at him. He stares back apathetically. You eventually ask him to elaborate.
He gives a short grunt of annoyance. "When I was young, we never had these parties. Always work. I got up early every morning and took care of the animals. These parties, these dances, we rarely had them. Occasionally on holidays. Always at weddings. Lots of weddings we danced at. But that was it. And lots of the happiness left after the oppression began."
You nod.
Suddenly, a lively, jovial folk tune begins, the violin bleating excitedly from the stage. János' ears perk up in surprise. "I know this song!"
He hesitantly stands. "My mother, she taught us this dance very young. For cousin's wedding. My sister loved this dance."
His head begins to bob to the beat, and his foot taps on the floor. He gradually begins to move toward the dance floor.
The other animals who had started dancing were following random, unplanned movements, but János seems to see the old steps playing out in front of him. He begins to softly clap his hands to the beat.
You follow him to the crowd.
Among the dancers, a young deer with long braids seems to catch János' attention. He steps closer to her and murmurs something which you don't catch. Her face lights up.
They take hands (paws, hooves) for a moment, beginning to twist side to side and kick their feet. They spring apart, János clapping loudly and stepping roughly to the side as the deer twirls. As they go on, they begin to draw the attention of the others.
You are swept up with a partner as others begin to follow their steps. Join, twist, kick, twirl, clap, step, kick, clap...
The atmosphere is merry as more and more couples join into the dance. At the center of it is still János and the deer, and they are both getting gradually more intense as the song picks up, doing more complicated movements and steps that the crowd finds harder to follow. Animals are twirling around the dance floor.
You catch a glimpse of János through the throng of dancing bodies, and he is practically glowing. He has a huge smile on his face. He is happier than he has been in a long time.
Then, just as suddenly as it began, the song ended, a loud high note for the finale.
Everyone clapped, and János seems to get a bit flustered, but the smile doesn't leave his face. He thanks the deer and makes his way out of the crowd.
You follow him back to the table.
You watch him closely. He is breathing heavily, his large chest heaving, but he looks positively radiant.
He catches you staring and grins even wider, knowing that he's been caught having a good time at the Gala. "What're you looking at, hey?" he asks teasingly.
You smile.

5/11/17-5/13/17 - I've been wanting to elaborate more on his history for a while, so here it is! I had to keep leaving so it took me 3 days to write, lol. And um. Yes, there are anthropomorphic animals who own animals. Don't question it, it just makes things more complicated. You both sit in silence as the rain pours down outside.

~~~
(Originally named Csíkos, but changed to János. If he's going to be a serious character, he can't be named "Stripey" lol)

Edit 6/2/17: Fixed verb tenses to be all in the present! I have a horrible habit of switching back and forth between past tense and present tense when I'm trying to write in the present, lol. It should read a lot more smoothly now. :)