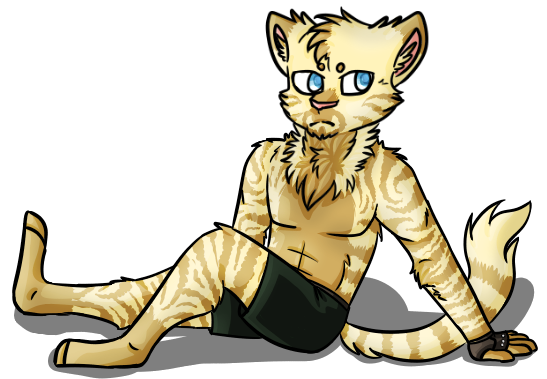 Rich playboy philanthropist Olipurr Queen was part of a well-known aristocrat family in Dragonsmaw Manor. Spoilt his whole life, he never experienced the hardships of life. One day, while sailing with his father. Their sailboat capsized, and that resulted him being stranded on the liferaft with his father, who sacrificed himself so Olipurr could survive longer with the rations on the liferaft, enough to reach an island.

When he finally reached an island, he thought he was alone, and so he survived by teaching himself how to hunt using a very simple weapon- a crude bow. After many months, he became an expert markscat.

He eventually learnt the hardships of life, and decided to try to build a raft to sail to the mainland and get back to his home. But months later, when he arrived back at Dragonsmaw Manor, he saw that his family's legacy has fallen, and that part of DM was overrun with criminals and other low-lifes. He proceeded not to tell anyone that he was alive, and now goes by the name of "Arrow" Using his skills with the bow and arrow to take down criminals. ↣ Arrow has kindly collected a bunch of Arrow memes for your viewing pleasure- 132 memes to be exact! ↢

DISCLAIMER
This character is a parody of Green Arrow. a copyrighted character. I do not own Green Arrow in any way.

All comments will be responded to in character.