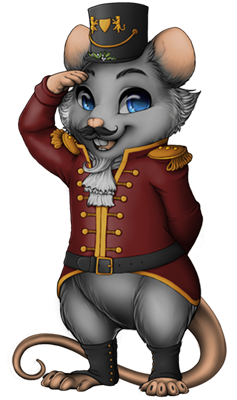 Alhwin is infected with Vampirism. Symptoms include craving blood, sensitivity to sunlight, an allergy to garlic, and changing into a bat after especially forceful sneezes. If they start to sparkle, immediately consume a Golden Apple to cure the infection.

The Story of the Nutcracker (a Furvilla adaptation of the nutcracker legend) By Myself
Alhwin was raised a carpenter in a poor village south of Olde Foxbury, and always admired Snow Fest. He loved the colors, the lights, the songs and the feasts. Most of all, however, he loved the spirit of generosity that warmed the hearts of all it touched.
One year, as the old rat was breaking open nuts stored for the winter, he thought to himself, 'There must be an easier was to open these nuts,' as hammering them lost much of the meat and biting them wore down the teeth. He was a very old rat, now, and as clever as he was he knew he could come up with a way to lessen the work of opening these winter treats.
As he toiled away in his workshop one eve, he began to carve a small, toy soldier having a large, strong jaw with a hinge. With a single bite, the soldier could swiftly pry open a nut without breaking the meat inside. This little soldier served the old rat well, and he grew very fond of it.
He certainly couldn't contain this fondness, however and the spirit of generosity filled him with the following to make more for his many friends and companions. Soon it became a tradition for him to carve these nut cracking soldiers for Snow Fest, and he began decorationing them in garb that resembled the festive themes of that wonderful celebration. He would even dress as a toy soldier and give out his nutcrackers to all he came across, spreading the winter love and cheer.
So the tradition of the nutcracker was born in Furvilla! Every year there after, for many years to come, he would give these gifts to young and old, big and small.

-------------------------------------------------
The Bearer of Gifts (the story of a loyal companion) By Myself
Alhwin had finished a new batch of nutcrackers, painted brightly and sitting to dry when he heard a heavy rumble outside his workshop. A brown chest was crouched to pounce when he swung wide the door. "Shoo!" he ushered "go home! It's too cold out for you." He had fear the creature might munch his good lumber if he didn't send it away. The chest turned and waddled in the opposite direction.
Later on, Alhwin hurried out the door with a bundle of his nut cracking soldiers. He would be taking this batch to Dragonmaw and needed to be hasty if he didn't want to be caught out at night. As he neared the edge of town, however, fate would have it that he took a tumble. Carved soldiers spilled this way and that. He had carried far too many for his own good.
Out of the brush sprung the brown chest from before. "NO!" he shouted, but it was too late. The chest had gobbled and garbled half the soldiers. "You terrible beast! How could you? Those were gifts!" The chest galloped away in a frenzy, fearing for her hinges.
"At least I will have half less to carry now," he admitted once he was alone again. On he went, delivering his nutcrackers.
As the evening set in, he was ready to leave Dragonmaw- not that he feared the town, but because he knew many residents who preferred the night were the sort that enjoyed a nice prowl, which spooked him greatly. Many of his contacts would go without gifts this year, thanks to the chest.
He turned down the twisted corridor-like alleyways of the winding buildings for some time before realizing he was totally lost. This was just what he was afraid of. It was when he made this realization that a wickerbeast of matted fur inched out of the shadows with a small group of other peculiar villagers. "What sort of uniform is that?" the wickerbeast spoke, their lips curling into a smile.
Alhwin choked and stammered, unable to speak, and found himself scrambling towards the nearest wall. The villagers gawked at him as he panicked and crept closer, making the panic that much more intense. Suddenly, the brown chest came bounding down the alley way, barking wildly.
As she bounded towards the group, wooden soldiers spilled from her maw all around them. The villagers awed and cooed! With the beautiful nutcrackers in hand, they realized his costume matched. "You made these?" the wickerbeast asked in an assuming tone.
"Why, y-yes, I did!" Alhwin stammered in reply. 'I did!' he thought to himself, looking down at the chest. The villagers thanked him graciously and apologized for the spooking; one even gave him a hooded lantern to better see home with.
As he and the chest returned to Olde Foxbury, he couldn't stop smiling. "I appreciate what you did for me back there. I'm not so good with new people, and the citizens of Dragonmaw make me nervous, admittedly." The chest simply panted up at him as he talked to her. "I suppose it is a bit silly to feel that way about them, isn't it?" The chest's tongue seemed to get longer, and she looked like she was laughing.
Once back at his workshop, he hung the lantern by the door and looked down at the chest. "Well, you can go home now, I should think. Someone must be missing you." Until then, the chest had been panting happily, but suddenly looked sullen before she turned away.
Alhwin watched her disappear into the darkness and began fishing through his pockets. "Oh goodness. Where now is my key?! I've gone and dropped it in the snow bank! I bet it was when I fell!" He slapped his head with a paw and shivered in the cold.
Tha-thump, tha-thump, tha-thump! So came the bounding of wooden feet as the chest ran back to him. Opening her maw wide, his keys laid on her tongue. "You wonderful, beautiful beast! Thank you again!"
He took the keys from her mouth and rubbed her wooden sides. He hadn't realized how coarse and rugged she was until now. "I don't know how to repay you for your generosity, but if you'd like to stay with me, I can repay you with my companionship."
She froze for a moment, as if thinking, then abruptly began lapping his face and neck. "Alright then, alright," he stammered, trying to get her to calm down, "I'll call you Alcine. You can be my official nutcracker carrier. How about that?" Her tongue seemed to get longer, and she looked like she was laughing. Paintie by myself/Rotsuoy. A winner of the 2016 Snow Fest paintie contest. (CSS Eternally Under Construction.)