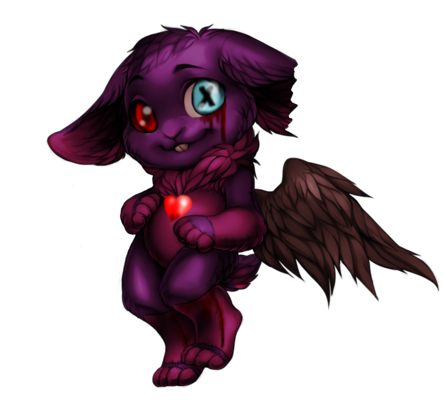 Fidget
She/Her | Plush Rabbit
~~~
Doll with glass' eyes
There was a night a song was sung
'Hey, what a beautiful land
Where I take you to, isn't it ?'
Alice in Dreamland ~ Vocaloid
~~~
Fidget was intended to be a plush cat, but the wrong pattern was chosen, and she became a rabbit. Her original owner loved her for this anyway, but her creators, on the other hand, despised her. They stole her from her owner and threw her out; they also threw out a cat that had a gash across its stomach where there was supposed to be a pocket for the owner's belongings. The creation came to life shortly after, and found that she was missing part of an ear and one of her wings; her heart, which was sewn onto her chest, was also stained and dirty. She was very twitchy, and took to playing with her still-intact ear as a way of keeping herself calm. This led to the cat, her new best and only friend, calling her "Fidget." The name stuck, and she also decided that, while her original owner had called her a boy, she was a girl.
~~~
She may look scary, but she is actually very quiet and friendly. However, she can be mean when provoked or influenced by someone else; for example, she has gotten involved in less-than-tame pranks and games under the guidance of her best friend, Technicolor. She would give her life for someone that she trusts, and has given up parts of herself to save people that she trusts. She does feel true emotions, unlike Technicolor, and still feels a bit of love for her creators, despite their throwing her out. The only human that she really wants to meet, however, is her former owner.
CSS by Lu !!!