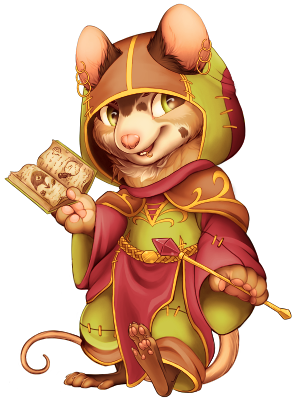 Shnook the Coercer
Say it with me now:
"Shnook Shnook!"

You notice a small hooded figure draped in an over-sized, brightly colored robe, In one paw is a gold wand adorned with a dazzling pink gem; in the other paw an old, curious book with pages worn and discolored. Beneath the cowl glows an eerie shade of green and as the figure slowly lifts her head you discover that the light is coming from her eyes.. Your heart flutters, you try to look away, but those flaming, prying eyes compel you to move forward. Faint whispers smooth as velvet caress your ears as you're enticed closer. You stumble forward, one foot forcibly after the other, until you're face to face with the figure. Your mind and entire being become overwhelmed with rage and blood lust, your emotions overflowing with fury towards this being, but you remain motionless, unable to move or control your own body. The figure takes her wand, and slowly, ever so slowly.. reaches forward and taps your nose.
"Boop!" the mouse says, and your mind and body instantly return to normal.
You gasp and take a deep breath, all the while trying to collect what just happened. Before you can say a word, the little mouse had already voiced a spell and disappeared. The last thing you hear is her little mousie laughter fading into the distance... Based on my Ratonga Coercer from EQ2.