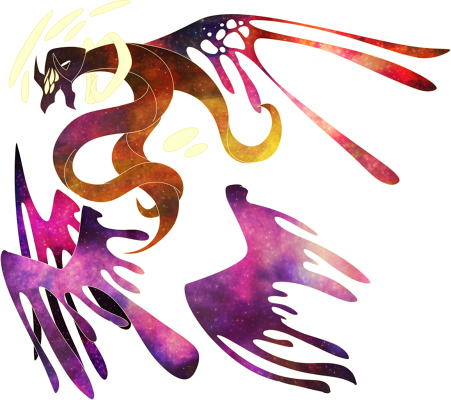 "A knight is sworn to valour,
His heart knows only virtue,
His blade defends the helpless,
His might upholds the weak,
His word speaks only truth,
His wrath undoes the wicked."

"The right can never die,
If one man still recalls.
The words are not forgot,
If one voice speaks them clear.
The code forever shines,
If one heart holds it bright."
~~~~~~~~~~~♥~~~~~~~~~~~
The guardian of Faecopse, ruling over the other guardians Praesidio and Reus.


When they claim that the universe was made by a canine, they are sorely mistaken. For it is not they who created all of space-time, but rather this one.

A majestic being of pure stardust and light, of vast energy and consummation. This beast is known as Coruscantis, and it is the protector of not only Goldwillow and its inhabitants, but the entirety of its creation, its universe, as well.
Based on its looks, one would assume that Coruscantis is a malevolent god. One would assume false. Coruscantis is infinitely kind, infinitely patient, and will grant any and all sanctuary under its wing.
~~~~~~~~~~~♥~~~~~~~~~~~
paintie by Voidilie on toyhou.se!
voice reference: Draco - Dragonheart