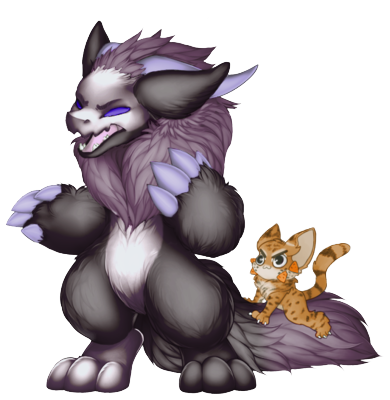 Timber will sacrifice an arm and a leg - literally, if he has to! - to protect his friends. He has a wild savagery that only battle can sate - hence his profession as a warrior - but also has a tender heart that allows him to protect those smaller and weaker than him.

During his off-time, Timber crafts pieces and trinkets that the Spooky Boys need in order to do they tailoring. Despite his big claws, his precision is spot-on and the Spooky Boys could never ask for better!

Timber is about twice as tall as Lucatiel. He is currently in a relationship with Zinhle, the Serval cat on his tail.