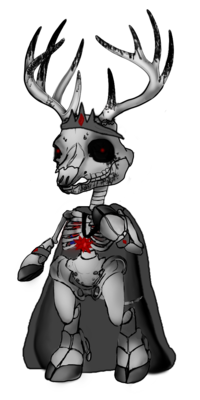 "Well they encourage your complete cooperation,
Send you roses when they think you need to smile
I can't control myself because I don't know how,
And they love me for it honestly, I'll be here for a while

A celebrated man amongst the gurneys
They can fix me proper with a bit of luck
The doctors and the nurses they adore me so,
But it's really quite alarming cause I'm such an awful fuck (Oh thank you!)

Former heir prince to a kingdom, he was assassinated before he could take on the crown. Golsworth however didn't move on, instead he rose from the grave to smite his killers. Unfortunately for him undead can't rule a kingdom without extreme protest, so he left. Now he wanders the land with only his sword for luggage as he has no need for food or water. Hes eager to smite those who do wrong, though a few people may disagree with him on whats considered 'wrong'.

He wears the jewelry he was buried in, not afraid to flaunt his noble beginnings. The amulet often being his excuse for the glow on his chest. Its not a very good lie, as one can still see his heart emitting the light through his rib cage, floating all on its own without anything to pump blood too.

Personality wise hes a total flirt, self-adsorbed, 'I do what I want' type of guy.