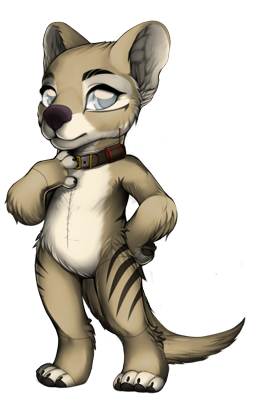 [ Paintie base by takaia ]
[ Profile art by me ]
[ Promethean: The Created is property of White Wolf Games ]

Sydney lived as Benjamin, the last thylacine whom died in 1936 at the Hobart Zoo. As fate would have it, an Osiran with a twisted sense of research came across the emaciated body of the last thylacine and decided not only to resurrect the species, but to test a common belief among Prometheans.

Until now, only one animal Promethean was known to exist; Great Grandfather Crow. No one knows what happened to him, but he has lived a long time on only the thin promise of humanity and what little Azoth burned within him. The Osiran decided to be the first to achieve humanity with an animal. After performing the ritual and bringing the thylacine back to life, he stayed by the creature's side. The thylacine named herself Sydney, after one of the words she saw on many signs and brochures. For decades, the Osiran and Sydney traveled around the island of Tasmania, trying not to poison their environment or the people around them with the ever spreading Disquiet.

Eventually, the Osiran declared the experiment a failure and left Sydney to her own devices like he should have from the beginning. With little space to roam, Sydney was captured. News of the rediscovery of the thylacine hit the world and she was set to be transported from Hobart, Tasmania to San Pedro, California.

Two months later, the ship ran aground at Long Beach. The men aboard were either dead or driven completely mad. Once the ship was cleared the search for the thylacine began. The creature was never found.