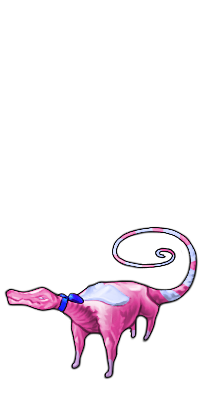 Squishy is infected with Vampirism. Symptoms include craving blood, sensitivity to sunlight, an allergy to garlic, and changing into a bat after especially forceful sneezes. If they start to sparkle, immediately consume a Golden Apple to cure the infection.

This handsome little fellow came from a far off cavern in Tigereye Peak, where he spent most of his days hitting rocks with his snout to pass the time. He never had to worry about much until some others of his kind robbed his hiding spot, and so Squishy headed out on a journey to find a new place to live, finding a wonderful home in the warm and comfy arms of sweet Taihani, who found him while exploring. Since then, Squishy has felt very much at home in Foxbury with his new friends, and has no interest in leaving anytime soon.
Squishy is a kind and friendly little guy, and hits it off with almost anyone. Of course, he is quite naiive and goes up to pretty much anyone with a big grin whether they look dangerous or not. Squishy might look like a monster, but he wouldn't hurt anybody at all! He just wants to have a good time with everybody and make friends.
Somehow, Squishy became really good at medicine. Nobody really knows why. He's an excellent doctor, despite the lack of thumbs.