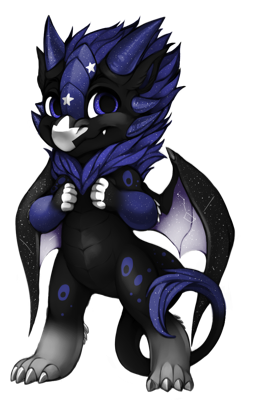 Castell is a very sweet dragon and a guardian of the stars. His mother Soléj (pronounced So-Lay) and his father Luno are guardians of the sun and moon. His friends Venus, Saturn, Uranus (Pronounced Ur-in-us for any of you looking to make a joke), Mercury, Earth, Mars, Neptune, Jupiter, and Pluto watch over their respective planets. Castell is very sweet and always ready to help a friend in need. His mother and father are king and queen of the stars, making him the prince. Because of this Pluto in particular looks up to him and admires him so he does his best to set a good example for the younger dragon. Although he's royalty he doesn't act like it and pays no mind to the fact, believing that his rank shouldn't change him. Despite his kind and a bit clumsy demeanor, he is very very strong and will fight to the bitter end against anyone who tries to hurt his friends or family.

The stars in his irises move as well

His horns can glow, lighting up the star(s) of his choice and causing it/them to shine brighter in the sky

(Any comments directed at Castell will be answered in character)