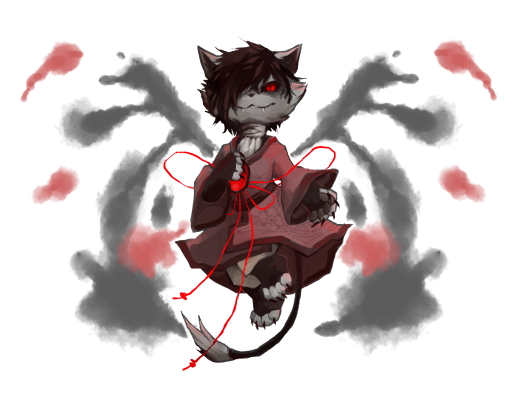 The skies are always dark above Lover’s Carving.

...I apologize, let me start again.

The days over the town of Lover’s Carving are overcast, invariably. To compensate, the leaves here grow in darker shades, streaked with purple and black. The flowers bloom in violets and reds. Nightshades and belladonnas make up our bouquets.

The fog rolls in when the sun sets, thick and warm, curling up on the windowsills, nipping at the feet of anyone foolish enough to still be wandering the streets after dark.

When was the last time Lover’s Carving saw the sun?

Well, not that that particularly matters to me.

I enjoy the nighttime most of all.

I wake in the evenings, to the setting sun. The only times it slips under the cloud cover is when it comes and when it goes. Its light filters warm and orange through the windows of the mansion, catches the dust motes in the air.

I love the evening, when everyone else scurries home to bed, praying tonight will not be the night. Praying to see the sun’s greeting in the morning, the mark of another night survived.

My butler rouses in time to greet me, already in his uniform. I knew I had an eye for talent.

He bows, offers me a cup of chamomile like he does every evening. I gladly oblige, settling down in one of the chairs in the sitting room. He sits opposite of me, glowering. Well, that’s simply the natural set of his facial features, so there’s hardly anything to be done.

I know what it is that’s on his mind. It sits heavy in the air between us.

I wish he would just get over it already. This is his reality now.

"Theodore," I say, initiating the conversation he’s too afraid to have, "how are the anemones in the garden?"

He tenses at my voice, but we’re dancing around the issue. This much he can keep pace with.

"Unlike any anemones that grow outside this town," he says, coldly. "There’s been a white fuzz on their stalks, recently. I was initially worried that it might be mold, but the plants don’t seem to mind it."

"I wouldn’t worry about it. It comes and goes this time of year."

"...Has it already been four months?"

"Haha. Yet it feels as though you’ve always worked here, doesn’t it?"

His face goes pale with the significance of my statement, the truth of it. It’s only natural that he feels as though his service here is a natural act. He is as much a part of this house as the wainscoting now.

"...Will you be leaving the house today?" He cuts straight to the heart of the matter, directly and without hesitation, even though his volume has notably dropped. I’m glad I do not have to initiate the conversation, this time.

"I feel as though I will. Mm…I’m a little peckish today, you see."

"...I see." His voice has lost much of its fire, only resignation now. I peek out at him with my good eye, his expression trained on the table before him, unable to meet my gaze.

"But that can wait until dark, Theodore." I set the empty teacup down on the plate, the clinking of fine china triggering some instinct now bored deep into his brain. He moves automatically to bring them back to the kitchen.

He returns to keep me company, lonely as I am in the home that serves as my castle. I appreciate the gesture, though I know he has no choice.

The clock in town strikes nine, bell chimes carrying up the mountain, and it is dark.

Theodore fetches for me my coat and helps me into it. Dark brown fur, the pelt of the alpha of the werewolf pack that loiters at the edges of my territory.

They do no more than loiter, now. They know better than to step foot on my hunting grounds uninvited.

I slip out the front door like a specter or ghost, unattended. Theodore is not necessary for these midnight soirées. Nor does he wish to be a part of them.

I take the winding path down to the town, worn only by the steady footfalls of the courier that comes every morning ere I go to rest and myself, every third month, when I seek out something warm and alive.

She is a traveller.

She doesn’t know the area, of course, which is why she’s still out at night. She hears the howls of the werewolves, finds herself stumbling in the fog. When a local such as myself reaches out a helping hand, she’s relieved.

The villagers were extremely rude to her, not one of them allowing her a place to stay. They kept their distance, averted their eyes. She swears she saw the inn close its doors as she approached.

"What’s the matter with Lover’s Carving?" She pouts, unaware that the road has been leading us in circles for hours. In the fog, she feels no fatigue, feels no pain as her body works itself to exhaustion.

"The town has a dark secret, my dear, that’s all," I tell her with a coy smile on my face. "It’s one most outsiders aren’t privy to, but I might tell you if you want to know."

"Will you?" She asks, nervous. Dark secret? But something so romantic tickles the curiosity; she can’t help herself. She has to know.

"I will." I bend down to her ear, like schoolchildren, whispering a rumor into the black night.

"There is a vampire in Lover’s Carving."

Silence. The first inklings of dread begin to crawl along her back.

"He feeds every third month, draining his victims completely dry. He walks in the mists, approaches travellers, vagrants, vagabonds - anyone unlucky enough to be out after dark."

I can feel her terror mounting in the harsh beat of her heart, so loud to my ears. Delicious.

"The third month, the townsfolk are wary. They send any travellers sad eyes and bar them from entry. It’s cruel, isn’t it? But you must be sympathetic."

I give her a smile, the last face she’ll see.

Her body’s exhaustion catches up to her. I can barely feel the force of her fists as she struggles against my weight, fingers digging clawlike into her shoulder and face, wrenching her into position neck bared and I can feel the heat of her pulse just underneath the skin.

She screams. They always do. And, like always, there is no one around to save her.

I leave her body to the maggots and worms that are already descending upon her frozen expression like vultures, scavengers. I’m glad that at the end, she is at least able to join the natural order of life, from which I have become so darkly removed.

It is early when I finally find myself at the threshold of the mansion door. My butler, thrall, welcomes me home with tired eyes.

"I’ve fed," I inform him, handing him my gloves stained with crimson, fading to brown (it’s sad that blood never keeps its color for long, but I’m sure the anemones that will sprout to serve as her grave will keep their color longer). Theodore already knows what to do with them. After all, he’s already been here four months.

His question after surprises me.

"What was their name?" he asks, unable to meet my eyes. Well, that’s only to be expected; for a hunter to be reduced to a mere thrall has done a toll on his self-esteem.

"I don’t remember," I say, carelessly, and indeed, it’s true; I don’t. "Madeleine? Madison? Something that started with an M."

"I see," he says, with a tone to his voice I used to know but can no longer understand. "Then, excuse me, master." He bows and leaves.

What good manners he has now.

Satisfied and stomach full, it’s easy to slip into a dreamless sleep in the coffin I keep in the mansion’s cellar. The fog should be clear tomorrow night, and perhaps the moon will even make an appearance. The town is safe for another three months, until my hunger strikes again.

Lover’s Carving is a beautiful town in the clear light of the moon.

If you have time, dear reader, then why don’t you visit and stay a while?

The mansion doors are always open for those seeking good cheer and good company.

And Theodore brews the most wonderful teas…