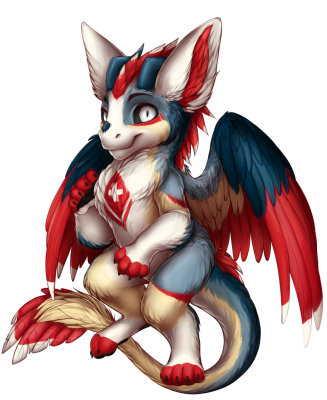 In a past life, Thunder was a race horse, but after passing on he became an angel dragon who follows humans around and keeps them company. He particularly enjoys distraught and despressed people because he loves trying to make them feel happier. He is a very fast runner and flyer and had a knack for finding things. From car keys, to lost pets, to your motivation, he can find it. Thunder says he can totally take anyone on in a fight or race, but it's not really true. Despite his big talk, when he's scared or angry he just cries.

I chose a Dutch angel dragon as my fursona because of what they symbolize; kindness, loyalty, and generosity. I hope I can lead a life that can be described with all three.

Thunder has a scar similar to the one i have in real life on his right ankle. it is a surgical scar.

EDIT: i just realized i put the scar on the wrong ankle. damn.

dislikes:
-meat (except chicken)
-sitting still too long
-being alone too long
-being cold and wet simultaneous
-needles
-automatic bathroom fixtures
-subways
-other things that are very loud
-cockroaches

If you're here to do art here's a ref for u, thanks fam