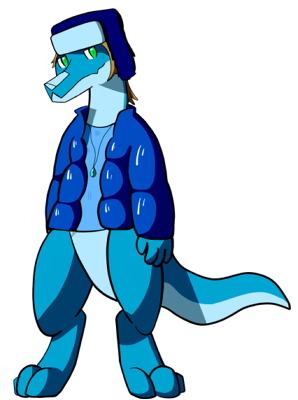 Bubbline loves to bake. His favorite dish is a pan of white chocolate brownies that he affectionately refers to as “whities.” His all time favorite food, however, is spaghetti with mushroom sauce blended with two tablespoons of sugar. He also enjoys video games (mostly platformers, Castlevanias, the occasional building game, and Monster Hunter) and sketching in his sketchbook. He also writes stories, but he’s not very good at it. In fact, if you were to ask him what his favorite hobby was, it'd be creation. Creating things and putting new things out into the world.

He’s also quite energetic despite his very relaxed appearance. However, this energy can be misplaced due to his depression. When said depression takes over, he tends to be quite the downer, and becomes much easier to make angry. Even when he’s not having a depressive episode, his energy is annoying to quite a few people, especially since he has an inherently loud speaking voice. Oddly, he strongly dislikes loud noises such as yelling, even though he yells a lot himself. This often leads to accusations of hypocrisy being flung at him.

Bubbline is also slightly anti-social, despite being the type of person that needs social interaction to remain happy. He spends practically every day (and most of every night) using some sort of technology with headphones on, shutting himself off from most of the world, but is always willing to take them off should the time arrive.