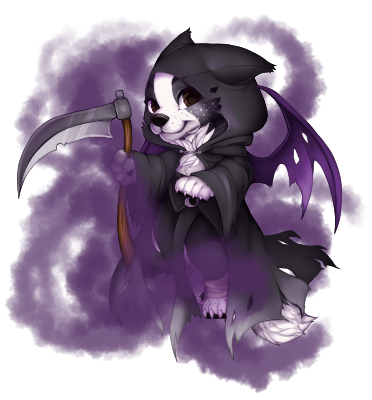 Mr. Fluffles is an amazing doctor and alchemist, though he much prefers Mr. over Dr. since that's his name of course. Mr. Fluffles barely sleeps, and quite often has bags under his eyes. He doesn't leave his house much, and people began speculating about him. They think he's a mad scientist, but he's not. He is simply dedicated to his work. Or that's what he claims anyways.
Mr. Fluffles only leaves his home on errands, getting plants from Missy, pets from Ezra, and bottles for the many things he creates. Mr. Fluffles has trouble making friends, since he's very awkward around strangers. Once you get to know him, he's very silly! He loves joking around and playing with animals, which he has quite a few of.
Mr. Fluffles often falls asleep in very strange places, and when he is visited is often found sleeping slumped on tables in the middle of the day.

Name: Mr. Fluffles
Office title: Dr. Mr. Fluffles
Gender: Male
Likes: Stufties, medicine, mixing things, potions, baking, cooking, being warm, friends, playing, being silly,
Bio: Mr. Fluffles grew up in the Oceandome, living in a small friendly village. Sadly, he got ran out because they all thought he was crazy, but he came back later! There were more people and they had realized he wasn't crazy, and got accepted in. They even helped him build his house! There was one hint wrong though, he actually was a bit crazy. When he was away, he mixed very strange potions. He became known as the wandering witch in another town, as no one ever saw anything of him but knew there was something magic out there. Back in his home village however, Mr. Fluffles stopped with the odd potions and kept going with his helpful ones. He became a doctor, creating medicines for the villagers. He did however start experimenting. He created strange things, starting to dabble in strange potions again even though he knew it wasn't good to do so. He fell asleep while creating a few, and they crashed together on him and exploded! He got dung back against the wall, and woke up. When he got out of his building, he shoved open the door and fell out. Smoke poured out of his house behind him, and he was coughing and felt extreme pain. When he got to his feet finally, he realized he wasn't home. The world was different, he was in a forest. He hurriedly checked around his house. After finding out he was safe, he found a nearby stream and soaked his cloak in it. He went back inside his house and opened all the windows, keeping his cloak over himself and his mouth. After it all aired out he explored and checked all his potions. He found out how to get home, though it caused another small explosion. He aired his house out again and started keeping a journal, writing down absolutely everything he did and mixed and found out how to travel to various dimensions.