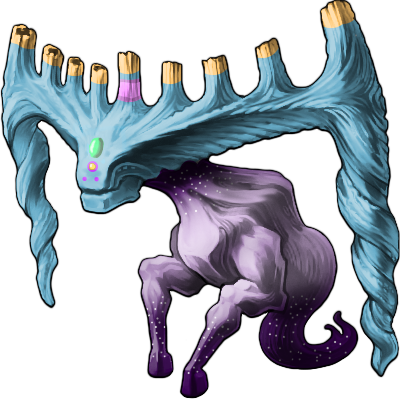 All replies from Coralis are in-character!

A wandering creature native to Foxbury. He seems very much alone and in need of companionship, though he seems to be unwilling to get too close to anyone. Despite his somewhat intimidating appearance, Coralis truthfully is calm and pleasant to be around, but he seems worried about causing harm with his huge horns. He speaks using telepathy and seems to have a very soothing voice, telling tales to those who are willing to listen.
He is a fierce fighter and is known to break bodies of those willing to go up against his formidable horns. He lets out a screeching roar after every victory.
It is believed that Coralis was once a regular villager, but many years ago, something terrible must have happened... Get your own battle card here!