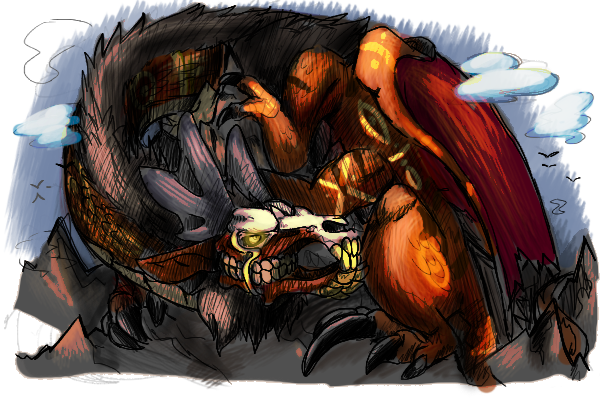 Long ago, in a time lost to the current day Terrmanian's, Millious was once known as the mighty ally to the Archmage, Ambrose the Vermillion, together they kept the world in a sense of peace and balance, uniting the non-humans and humans together. a peaceful time, but unfortunately short lived

One fateful, day a entity, soon to be known as one of the Mortellian's, offered Ambrose a chance at immortality. the deal was simple; Keep Millious alive, and he would live forever and that only Millious could kill him. Ambrose agreed to this deal, not thinking of the consequences that would follow. Many years passed and soon Ambrose had realized his consequence, the older millious got, the more aggressive and destructive he became, eventually leading to the dragon destroying various villages and driving a rift between humans and non-humans again. and when ambrose confronted the beast, he lashed out at the wizard, attempting to kill him.

Ambrose realizing his friend was becoming a threat to everything and that if he dies, nobody would be able to stop the beast, so he lured Millious into the Gorre Mountains where he sealed him away atop the highest peak, forever encased in stone. fearing that someone would undo his seal, Ambrose casted a spell to hide the mountain from anyone, to ensure Millious would never awaken again.

At least thats what he wanted to believe...

Thousands of years later, Ambrose lived to see a great and terrible war, where magic and nuclear warfare tore the world asunder leaving its survivors scattered and weak. little did Ambrose know was the magic was polluting and distorting various areas, eventually reaching up to the highest peak on the Gorre Mountains, where it slowly began to whittle away at the seal, soon to release the scorching, unbridled rage of Millious, Dragon of the Anguished End.