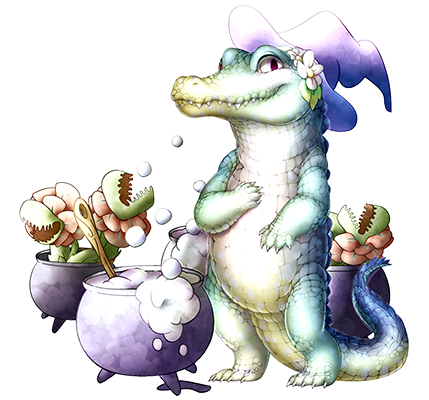 Ursula no longer has a house! They will be unable to work. Please replace the house or move Ursula into a FC slot.

Far away from the village, through the trees on an off-beaten path, a clearing exists. The ground is swampy, wet, and hard to walk through. A rickety old house covered in vines is sitting dangerous on one side of the hill.

As you approach the house, you notice a dangerous looking garden in your way. Dozens of large carnivorous peer over at you and many of them start closing in. The door to the house slams open and a large disheveled looking crocodile storms out. "No, no, no, no! Bad Willabee!" She bats at the largest plant with her stubby arms. "Quickly, come in!" She slams the door behind you as enter her shack.

"They just love visitors. They always think they'll get a treat if they pester you." The inside of the house looks concerning. It was surprising enough someone was living in an abandoned shack. However, books, scribbled paper, and plants are all over the floors. Some of the plants are growing inside pots, but mold and sprouts are also growing straight out of the walls. The most worrying thing is a large bubbling cauldron in the middle of the room. Whatever it contains was spilling onto the floor creating bubbles and mist. The cold nips at your feet but the rest of your body is extremely warm for how drafty it looked outside.

"It's so nice to have visitors. I don't have visitors often..." The crocodile attempts to tidy up and finds a chair for you to sit. It has an odd stain on it from unknown origins. "I'll get you something to eat." She shuffles over to her cauldron without even asking you. To your horror, she pulls a potion bottle and ladles the mixture in the cauldron inside and scoots back over to hand it to you. "Well don't be shy. Eat up." She seems to be staring at you intently just waiting for you to drink the mixture. You try to refuse but she doesn't seem to understand. "I have plenty more. You feel free to have this one. I can always brew more." The crocodile attempts to smile but fails miserably looking rather menacingly at you. A creepy swamp witch who lives in a murky part of the forest outside town. They don't interact much with the other town members other than once every few months strolling through town to selling her potions. No one ever buys them. They haven't realized yet that their attitude is off putting, continues to try to befriending people, and inviting them to sleep over. It tends to sound more like they're going to kidnap people. They enjoy taking care their garden. They don't move houses though because they find Dragonsmaw Manor too scary for them.