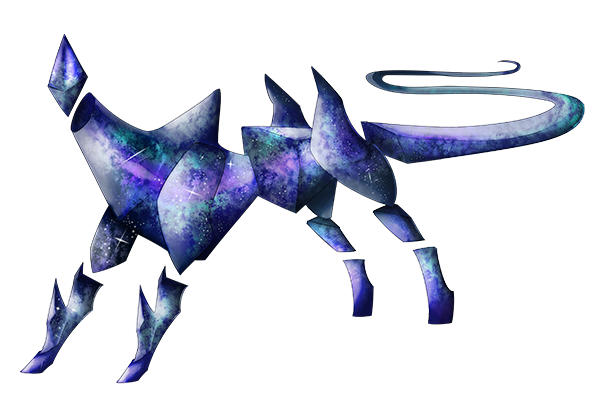 What is this thing? It looks like it's struggling to keep its form.

Age: 300..something. That's apparently still a relatively young adult for whatever he is.

Nobody really knows where Regal came from. Peridot theorizes he came about when Giggles was playing around too much with stardust and black magic, but if that were true everyone would have heard about it. Instead, it seems he just appeared, as if one of the villagers was taking a walk at night, turned around, and..he was just there.

Because of his bizarre form and the fact that he towers over every other villager except Gilmarie, some find him to be quite creepy. It goes with the fact nobody's ever really heard him speak, except Auriane, who's heard him muttering something while getting the necessary herbs for his potions, but she can't discern any words. (According to her, he apparently has a really handsome voice.)
He also regularly speaks to Giggles. Only Giggles has heard him form full sentences. Yes, his voice is quite handsome.

Even though he is some form of abomination, it seems he has enough intelligence to be able to keep up a job despite having a galaxy-print Sims diamond for a head.

Alchemy and potion making is hard when you have angular, polished rocks for "hands". Regal usually has difficulty trying to pour mixtures into small glass bottles without dropping them and getting frustrated. He also occasionally knocks everything on his work desks straight onto the floor in a mess of glass and liquid in one swing of his tail, right before slipping on it with his gripless, impractical feet and falling, cracking one of his segments.