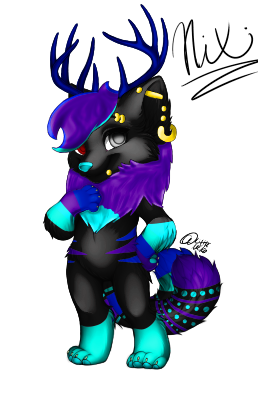 Name: Nixi
Gender: Genderflux
Preferred pronouns: none
Sexuality: pan
Job: Art Store Manager (work in progress)
Job Description: She manages a store and she raffles and auctions off art along with does commissions from time to time.
Personality/Bio: She is very kind and caring. She has multiple personalities each given a physical form by magic from a sorcerer named Malin, which helps her keep her sanity, kinda. She has six personalities in total, Nixi, Autumn, Matthew, Wrath, Eclipse and Shadow. They all live in the home together but Nixi was the very first. She was found by Autumn and Matthew, starving, and being aggressive with anyone who got too close. After a while of trying Autumn finally was able to reach out to Nixi and find out what was going on. Nixi soon was allowed out of the basement, which was full of jail cell like rooms, which she was locked in one. After she showed Autumn and Matthew around the mansion she was raised, and found, in she discovered Eclipse protecting Shadow in the garden hidden in the back of the mansion. Soon other residents of the mansion previous to its abandonment returned making Nixi very happy. Some were afraid she would still have her aggressive nature, which she does, she just has more control over it. Malin returned with Wrath and explained to Nixi and all her other personalities that they all where part of Nixi but since they where all separated they had then become their own beings with no physical relation to Nixi or each other except for Autumn and Matthew who ended up being twins. No one really knows what happened before Nixi's personalities were separated from her but there are bits and pieces of the story remembered among the other villagers. After she lost her aggression she became a very kind creature who was very creative. She is the owner of the mansion and has places some basic rules. If not followed she is not always the nicest person. She loves animals and loves to help Lunos but over all loves her Stormy Cloud Dragon, Stormii, the most. She is found having a short temper but there are things that make her happy, especially food. She has a dark sense of humor but has lots of puns she uses at random moments which are much happier then her dark humor. She is a mostly cheerful bean but loves to make sexual jokes. She owns an art shop so you can always go by and say hello as shes normally very welcoming unless she has a reason to hate you, but because its more money she will still sell art to you, it will just be obvious she doesnt like you, which doesnt normally happen.
Siblings: n/a but traces have been seen
Relationship status: single
Crush: n/a
Best Friend: Ivan and Namani
Other Family Members: n/a but traces of them have been seen
Extra Facts: No one except Malin actually know the reason for the abandonment of the mansion and Autumn and Matthew dont remember the mansion before they found it by accident.