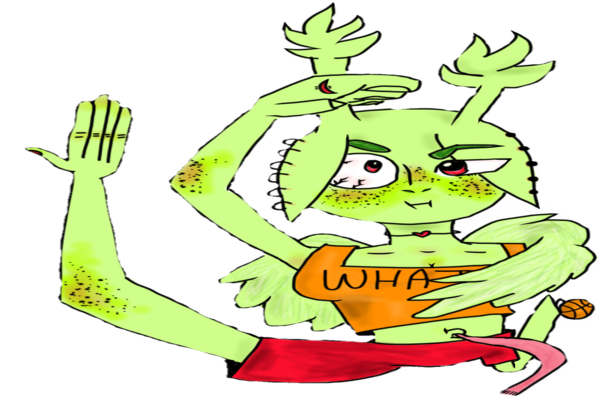 Mutant Thing is infected with Lycanthropy. Changes into a beastly monster after exposure to moonlight or especially frustrating board games. Howling at the moon relieves the symptoms for a little while, but use a Golden Apple for best results.

Adopted as wanderer!
Paintie by frick

Everyone's pretty sure they crawled out of nuclear waste. Is basically a cryptid. Only seen on cold nights near Dragonsmaw forest and rarely seen in town. They scoot around as they can not walk. They likely just want a friend. Or a meal. No one has figured out which nor wants to. It's unknown if they can speak.

One wing has mutated to make up for the lack of an arm, and this wing can grab things although it's rather half-assed. The wings can't even be used to fly. They are also blind in the right eye. No one knows why it has a tongue in its belly button.

Zatarin thought they were a monster and he kicked them in the face on the first encounter, they did not enjoy that. They are scared of him now.

They seem fascinated by Zergian however, they tend to watch it often. It may have something to do with its radioactivity.

Dr. Boop is worried about their health. They do not like when the snake tries to lure them in to his clinic. They are not dumb enough to fall for it, even though it's not a trap. He just wants to help them.