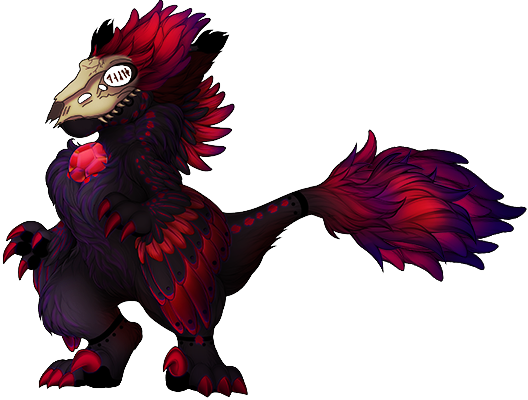 Ally of Theo. Due to Theo being able to give him a form within the gem of this beast, he is able to roam this near plane with ease, away from the prying gaze of phantoms and other spiritual demonic entities. And, most importantly, it keeps him able to talk to his friends!

Despite his appearance, he is very cheerful and friendly! However, as the body he's currently in is that of the void--and holding Atsuki's spirit of light--it just so happens that this is how he wound up looking like. He loves to josh Theo about it, as Theo very much enjoys the goth appearance their friend has taken on. Atsuki can't take himself seriously though, and every attempt to be "scary and brooding" just ends up with Atsukit giggling uncontrollably while Theo desperately tries to get him to "act his appearance". Which is still hard, considering that he's a diminutive size, standing at barely 3 feet tall!

He hopes someday to find his sister, and is glad that Theo is supporting him. The world is so vast, and Atsuki came to know little to none of it before he originally fell--and Theo seems to know a lot.

In complete awe if Fleurri and a bit of a puppy-dog crush on her, though he'd never admit it.

<Paintie by @Magnolia ! You can find their art here! >