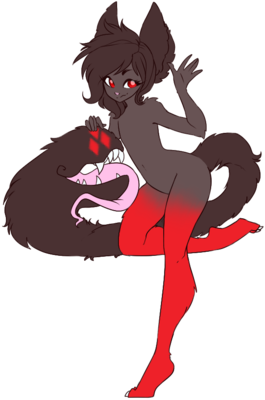 Neku and Sol - the fourth oldest set, Neku and his mouthtail, Sol, don't get along at all.

Ami, Honey, and Amber - The second youngest but most ruthless, it's rumored that Ami's second mouthtail, Honey, came from another tailmouth who was defeated by her.

Cherry and Cola - Cherry is the tailmouth to Cola, and the older twin between her and Lime and Kiwi. Sala is her elder, making her the second oldest.

Lime and Kiwi - Lime is the tailmouth to Kiwi, and the younger twin between her and Cherry and Cola. Sala is her elder, making her the third oldest.

Flare and Sunspot - Sunspot is the mouthtail to the hotheaded and short-temptered Flare. Though the two are weak due to how short Sunspot is, they don't hesitate in fights.
~~~~~~~~~~~♥~~~~~~~~~~~
paintie lineart by Tailgatescutebooty
colouring by veemo
all tailmouths listed belong to veemo
species by tailmouth on deviantART