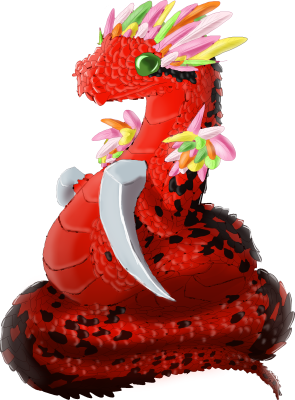 Chythrei is infected with Lycanthropy. Changes into a beastly monster after exposure to moonlight or especially frustrating board games. Howling at the moon relieves the symptoms for a little while, but use a Golden Apple for best results.

-Pixel done by SpaceKrakenOfDoom ! Pinkthrei <3
Chythrei is quite the daring basilisk, as is shown by his lack of feathers on his limbs--he lost them in a fight. Of course, he's still young and in his prime, so fighting isn't a big deal to him. Though he doesn't only fight! His passion truly lies in... chemistry! Alchemy! SCIENCE!
-Not that anyone in the village lets him near the plants or alchemy equipment. His eyesight is horrendous, and as he's already caused more than a few explosions through his inability to measure solutions as precisely as he needs, and with slight poisonings of visitors because of poor labeling (H2O2 needs a label. It is NOT water) he's been assigned to be a warrior. With his giant claws, he doesn't need to see well, and he enjoys fighting anyways, and does chemistry in secret in his free time!

Chythrei, like most basilisks, does have a petrifying gaze, and can be pretty liberal with using it. Because of this, it isn't very strong, but mostly works to slow his enemies down. Of course, he kind of doesn't care about this, as he's so much more interested in impressing others with his chemistry knowledge, making chemistry puns, and flirting with some very attractive females (though he'd do it to any gender. So long as they're attractive). He's very cheeky to anyone who acts any sort of rude to him, and is prone to trolling others, simply to get a rise out of them, because he has no fear! He can take on anyone!

When he was younger, he was much more... aggressive and brash. It might have netted him a life-long rival, but he doesn't know that yet. Nor would he care. He shouldn't really be blamed for his father's murderous nature....

LET IT BE KNOWN, THAT ON THIS DAY (7/28)
WITHIN THE HOUR (of midnight)
MY MOST NOBLE WARRIOR AND SCIENTIST CHYTHREI THE BASILISK
HAD FOUGHT NOBLY
AND GOTTEN SPOILS MOST RICH
A STARRY GURDIAN KITSUNE

((Paintie info:
((I did the lineart and Guren did the coloring! :D and you can commission him here! ))