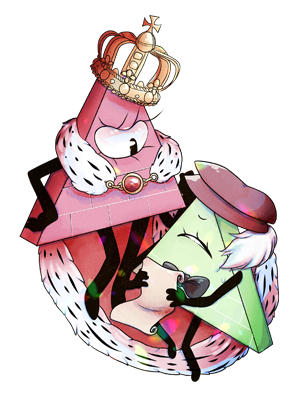 A regal red triangle demon who wears a crown and royal cape. He rules over a small dimension filled with various forms of life. His subjects include humans, beasts, and other shapely demons similar to himself. Though he has a resting grump face, Carmine is level-headed and looks out for everyone as best he can and tries to keep things as fair as possible for everyone. He is generally well-received by his subjects, though this is mostly thanks to Verde's compassion and advice behind the scenes. Carmine and Verde have agreed to keep this between themselves, however, so that the dimensional residents don't think less of Carmine or see him as unable to rule the dimension alone. As such, Carmine will never ask for Verde's help in public eye, though often seeks the latter's counsel when they are alone. Though the red King is full of confidence and his subjects see him as charismatic, Carmine often struggles with his vocabulary and expression of his feelings.

Carmine's muse, a minty green triangle demon that wears a beret and bowtie. Verde was originally hired by the red king for his artistic capabilities and asked to decorate the castle after the red King noticed his talents. Unlike the his red King, who is confident and graceful, Verde is shy and often bumbling or clumsy. He and his king are equal in intelligence, but what Verde lacks in confidence, he more than makes up for in his empathy and creativity. He was summoned to the castle originally for his paintings, but his writing skills and vocabulary proved to be useful for helping Carmine with speeches and other situations. He also sees things in people that others might overlook, something noted by Carmine after observing one of Verde's painted portraits. Verde's summons to the castle were originally supposed to be temporary, but after spending time together and Verde proving to be both useful and enjoyable company to Carmine, the two grew close and eventually entered into a relationship with each other, though this has yet to be announced publicly.