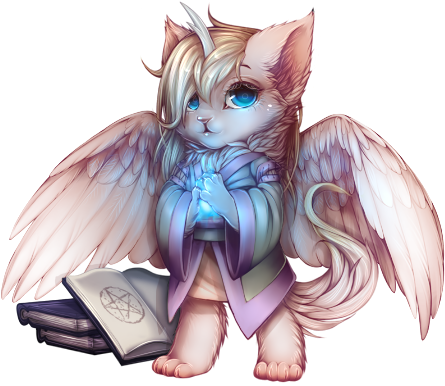 Lilun is infected with Vampirism. Symptoms include craving blood, sensitivity to sunlight, an allergy to garlic, and changing into a bat after especially forceful sneezes. If they start to sparkle, immediately consume a Golden Apple to cure the infection.

Colored by yam
Color Pallet/Moral help by Seruta
Base is by Me
Idea: Fursona Generator
A divine cat, it has an ancient voice which awes mortals but they fear, is a librarian in hell.


Name: Lilun
Gender: Fluid, Lilun can change to male or female depending on mood.
Age: Older than the dirt that makes the land.
Job: Liberian in hell, FV, Herbalist
Home: Random books, and or libraries.
Personality: Extremely straight forward, soft spoken and lacks empathy to some extent. Lilun is also naïve about most things but curious to learn. Only her memory is bad, often forgetting anything other than books and plants. Also creepily attached to her soul collection.

Lilun is a very old creature. Once revered as a divine beast it had its own following and as more mortals appeared, doted on them. Making flowers bloom in the trees so they would bear fruit and feed the many. Years ticked by when another race became strong from mortal sin and fear. Demons. Lilun was captured and dragged into hell. Meant to be a pet Lilun proved too much for any to handle for long. The owners tended to die in accidents.

Having spent too long in hell Lilun could not be returned for fear of it going insane and killing everything. Thus, the divine creature was given a simple job of sorting books. Said job grew, and Lilun took over all of Hells books and made a library wherein many of the older and more decrepit books house souls being held in prisons for eternity. What’s in the books no one but Lilun knows, nor can any but they pull the soul free once placed.