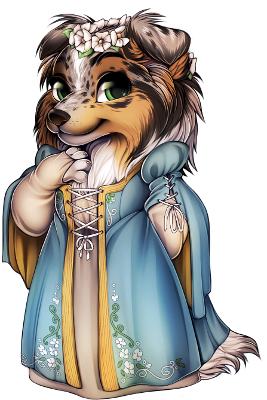 A big sister to Leo
An eternal rival to Aulne

Fair Lady Mélusine is known for officially owning half Aulne's forest, thus resulting in a century-old cold battle, as both of them appear to be small nature "deities"; Aulne being a trickster, Mélusine a forest enchantress.
Whilst she embodies purity and justice, her rival will mostly try whatever he can to reach his goals, possibly harming other creatures in the process.

Mélusine protects whoever maintains a bond with nature, hence her affection for young herbalist Leopold, who she sometimes helps growing plants faster using a bit of magic..(but shh, keep it a secret~)