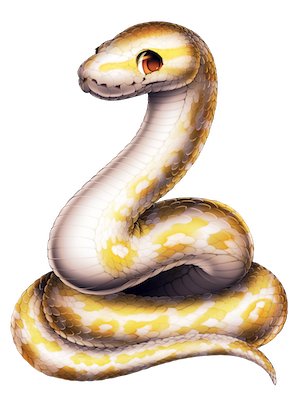 A shy but very friendly snake. She was once a fighter, but has since given up on killing. Most of her time now is used to explore and practice alchemy. While she is still learning the latter, she is learning quite rapidly.

Anshar also has a bad habit of testing her morphing potions. Seriously she had to figure out how to turn him into a normal furry when he had the amazing idea of drinking five potions at a time. Fun stuff.

Anshar: The two have been friends for as long as she can remember. She is the brain of the duo, while he is the brawn. He can be frustrating to work with, but she still cares for him.

Ianiatus: Good friends, she visits him often, both to keep him company and to collect some plants for her potions.

Sunder: They don`t know each other very well, but she seems friendly and nice. Ianiatus seems to trust her at least.

Malco: The yak likes to give her little trinkets he either finds or makes. They're friendly to her, and Cyprian sees nothing wrong with him.

Fyguard: Cyprian is cautiously friendly towards the deer. While he hasn`t done anything to wrong her, there is definetely something off about him, as if he`s hiding something.