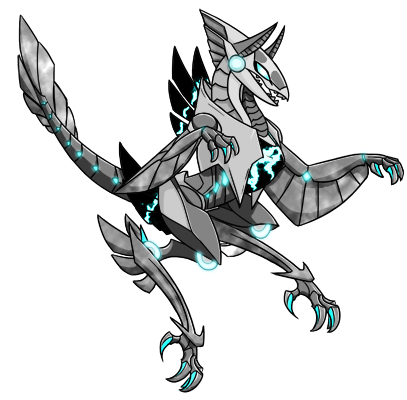 This eyrietech was found broken down in Dragonsmaw's wilds by one of the villa explorers, but was repaired to a working state by Amelia and Draakendros. Now he lives at the villa as one of its residents. His demeanor can be rather intimidating and severe, but he's always striving to be useful.

Dislikes: Performing his duties poorly, technical malfunctions (some of his systems are still on the fritz from the damage he took).

Fun fact: Originally, Takeshi went by his serial number, 74K; it was Chara that came up with a proper name based on that. He also doesn't mind the fact that the villa residents have taken to referring to him as as if he were male, even if he finds it eternally confusing.

Paintie made by Rung. Eyrietech species and base created by Monster.