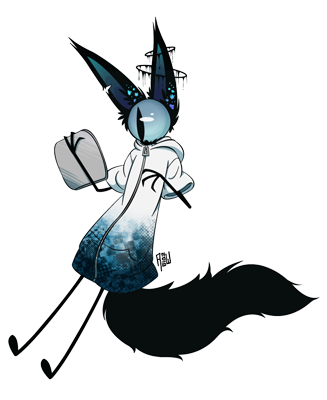 Tiny. Shy. Always anxious. Always stressed. Always screaming internally whenever he's being watched or looked at. Prone to anxiety attacks and meltdowns whenever he's in the spotlight too long. Refuses to eat or drink anything when anyone else is around. Super self-conscious about his butt sparkles and that's why he wears a hoodie. It's too big for him, but he's okay with that. Don't touch his halos.

His fight-or-flight response is always flight. Not a fighter. Too tiny. When he starts to hit his stress limits his body shakes and he hugs his tail.

Just wants to be left alone.