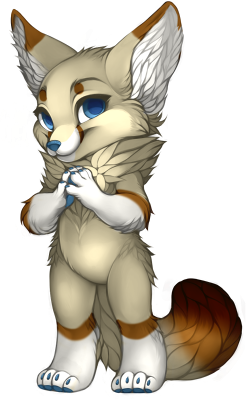 Sahara is a female fennec fox, and she is very small and short in stature. She is very easily upset, but unbelievably loyal to her friends and family. She's overly excited and skittish, and screams a lot. She also has a bone disorder called Osteogenesis Imperfecta, which makes the bones brittle and easy to break. (I could ramble for days on O.I., I won't bore you with everything about it.) She loves the internet, drawing, YouTube, soccer, and basically anything online. She dislikes heights, social places without a friend around, P.E., and water. Sahara is not interested in a romantic relationship, she'd rather be friends with everyone. She is very physically challenged due to her bone disorder, and is slower, weaker, and all-around less capable as the average person is.

(NOTE: Sahara's backstory does not match mine in any way.
MY STORY: I was born, moved a few miles away.... and stayed there for basically my entire life. I have a stable family, my parents are still together, I'm not depressed and never have been, I have loving and supporting family... Yeah my story is pretty boring. Time to make it interesting!)

Sahara was born in a little town in a wide-open landscape, fields in every direction. Her family moved to a nearby slightly-bigger town, which had restaurants and car lots galore. She often helped her uncle and cousins in their farm about 15 minutes away, and she always loved summers when she helped them more often. They raised horses, and grew various crops, but Sahara liked riding their horses the most. When her family moved away from her uncle and cousins, she was devastated. They lived too far away to visit often, typically once or twice a year. She missed the cousins she loved like brothers, her uncle who treated her like a second dad. She loved seeing them when she could, and would ride her favorite horse, Dutch, whenever she went. Unfortunately, Dutch died when Sahara was a young girl, and she was pretty sad to see her childhood friend go.
She broke her first bone when she was in the 1st grade, her left arm. She was on the playground at recess, and tripped over the loose strings in a soccer goal. Because Sahara is left handed, she had to use modified pencils to write in school with her cast. She stuck the pencils through styrofoam balls so she could grip them. The second bone she broke was a fractured spine disk in the 5th grade. She had fallen during P.E. and fractured her spine, crushing a few disks together. While she was sore for a few days, a brace wasn't really necessary since it was a minor fracture, and it would heal on its own. Sahara broke her leg in 9th grade, and used crutches to get around. She had kicked a soccer ball wrong, and it broke her leg. Now, she is in college, studying to be an animator. She is yet to break any more bones, but she has come close a couple of times.

SOME INFORMATION ABOUT O.I.

So since Sahara is my fursona, I figured she would have the bone disorder that I do. It isn't life threatening in my case, thank god, I've seen it be crippling. I don't have any major injuries currently, but my friend has a broken wrist at the moment. If you've ever had a broken bone, you know how torturous it is.
Now imagine doing that every time you fall. Yeah, that's basically what a person with O.I. goes through.
O.I. stands for Osteogenesis Imperfecta, and the disorder causes the bones to be very fragile and easy-to-break. We have to be CRAZY CAREFUL, it's like we're made of glass.
I was lucky, I've only ever broken two bones. When my mom was my age, she'd broken over 75.